This somber film about the luxury of human choice begins somewhat strangely: An elderly rabbi delivers a rousing sermon to his northern London congregation about the Creator’s unique gift to man that allows him to choose between the wisdom of the angels and the instincts of the beasts, the bestowment of the capability to disobey the law decreed by God and to pursue another less indoctrinated path. Suddenly, in midsentence, the cleric collapses, to the astonishment of the assembly. His subsequent demise sets in motion the triangular quandary of Disobedience, Chilean filmmaker Sebastián Lelio’s adaptation of Naomi Alderman’s 2006 novel and anticipated follow-up to his Oscar-winning A Fantastic Woman.

Of course, the capacity to chart one’s own destiny is not equally afforded to women in patriarchal institutions such as Orthodox Judaism, an inequity that informs the drama precipitated by the unexpected reappearance of the deceased rabbi’s prodigal daughter, Ronit (a profoundly sad Weisz), in the religious community she abandoned years ago. In the eyes of the fervently committed who remained there, she is persona non grata, an unwelcome outsider for daring to leave the fold, for daring to be different. Without resorting to calculation, Disobedience cryptically courses a familiar narrative in which an estranged character’s presence disrupts the place once called home for reasons that slowly unfold. When the shadowy truth is finally revealed in this instance, it’s neither a sensational revelation nor a particularly melodramatic one, but it sustains the narrative with a quiet, if not vigorous, passion.

The tone here is austere and subdued, almost to a fault. In the initial scenes marking Ronit’s arrival from New York City, a cloudy veil suffuses the film. Under Danny Cohen’s washed-out cinematography, the colors are repressed, much like the life of Ronit’s childhood friend, Esti (McAdams), now married to the young rabbi (Nivola) who was taken in by Ronit’s family as a boy and raised alongside her. But when Ronit reconnects physically and emotionally with the one she left behind years ago to pursue a life outside the rigidly religious existence of her upbringing, the movie visually brightens, lifting the veil to illuminate things more clearly. It may be an overly simplistic artistic choice on Lelio’s part, but it works, presaging change in a world nearly suffocated by tradition. Finally – let there be light!

All three principal actors – Weisz, McAdams, and Nivola – give effectively constrained performances. They work as a team here, consistent with the delicate balance in their characters’ complicated relationships with one another. When the opening sermon is neatly echoed later in the third act as a way of communicating love in its most selfless form, it’s a beautiful thing, followed by a teary-eyed emotional embrace among three people bound together by the past, but now untethered going forward. If you’ve found something inspirational in the homily of emancipation in Disobedience, you’re likely to have tears in your eyes, too. 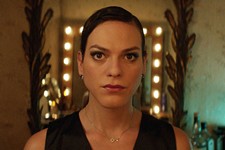 A Fantastic Woman
Emancipation in grief in this Chilean Oscar-nominated film.