Bronc rider Brady Blackburn (Brady Jandreau) has a steel plate in his head where his skull was crushed after being thrown from his horse during a rodeo show. Despite spending three days in a coma and experiencing lingering physical trauma, Brady yearns to ride again even though his doctors warn that he will likely die from any further head injuries. A cowboy and a gifted horse trainer, Brady has grown up in South Dakota on the Pine Ridge Indian Reservation and knows no other life. It’s the life his father has led, and the preoccupation of all his friends. If Brady is unable to ride horses again, the young man will lose his identity. Cowboying is not a job but a way of life. If he’s not a cowboy anymore, is he still even a man? While recovering from his skull injury, these are the kinds of questions Brady contemplates.

Filmed with non-actors in Pine Ridge, The Rider is a stunning piece of fiction played close to the bone. Brady Blackburn, his father Wayne, and autistic sister Lilly are played by members of the the Jandreau family, re-creating aspects of their real-life experiences. Lane Scott, a champion bronc rider and dear friend of Brady’s, is cast as himself, a celebrated rodeo rider who is now permanently disabled from a horse toss and spending his remaining years in a rehabilitation facility where he communicates via sign language and is unable to ambulate on his own. Job opportunities are scarce in this part of the country, and when Brady takes a temporary job in a little shopping mart in town, it appears as if his store clerk’s uniform stifles his body, and his pricing gun is an unloved plastic toy. It’s clear to Brady that he was not meant to work indoors. Unable to find new purpose, Brady notes that “if any animal around here got hurt like I did, they’d have to be put down.”

The vast sky and plains of South Dakota are beautifully captured by cinematographer Joshua James Richards. Prize-winning writer/director Zhao lyrically frames the characters within the shots, making them seem part of the landscape. Everything and everyone are natural parts of the images, whether it’s guys horsing around at a campfire, a father stressed by his conflicting desires to have his son survive but also “cowboy up,” a hobbled horse that has to be shot dead, or a family member on the autism spectrum who is not “explained” or treated as either a peripheral or central family member. She’s just Lilly; she is who she is. A sequence that captures Brady driving home after visiting Lane focuses on the young man’s face, waiting for his tears or emotion to break through. We wait, and gradually see a lump form in his throat, a true physical precursor to the emotions that Brady long ago learned to suppress. The Rider solves none of the dilemmas it so poetically articulates. Clearly, cowboys and masculinity ain’t what they used to be. Yet Brady is unable to imagine any other kind of life for himself. You can almost hear the faint sound of another character from another movie plaintively whispering, “They shoot horses, don’t they?” 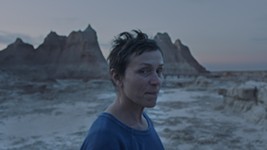