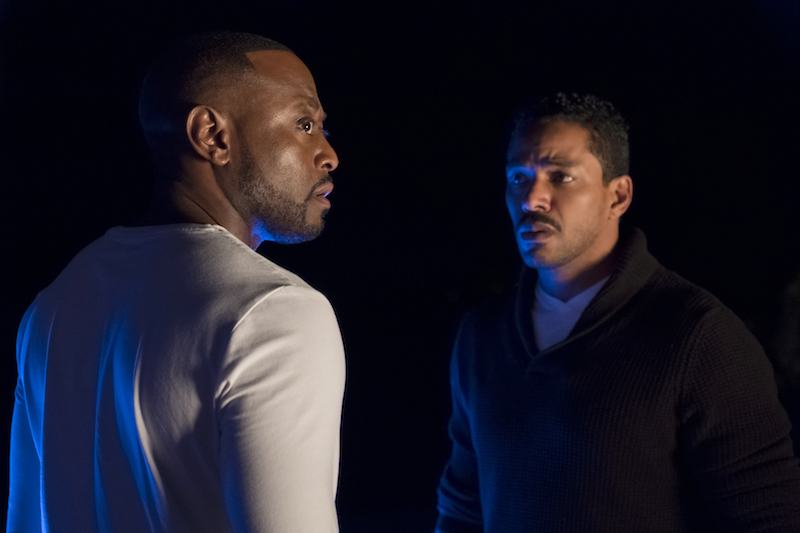 An off-putting whiff of exploitation pervades Traffik, which begins as a meandering relationship drama and ends up a lurid pseudo-thriller about the sex slave trade, one crusading to expose the horror of this modern-day subjugation while objectifying its torn-and-tattered female prey like a grimy photo spread in a fetish magazine. Noble intentions, ignoble results. In a more sophisticated filmmaker’s hands, the movie might have subversively worked both angles to better effect, but here the more literal-minded director Taylor goes only skin deep, with an unmistakable emphasis on half-clothed misery.

The film begins slowly and inauspiciously, as if lying in wait. Brea (Patton), a frustrated journalist working for a Sacramento newspaper, and her boyfriend John (Epps) decide to spend a romantic weekend together at a secluded Sierra Nevada hideaway with (natch) no cell service, where he plans to surprise her with an engagement ring. On the way there, Brea has a cryptic conversation with a druggy, unkempt young woman with perfectly bleached teeth in the ladies’ room of a roadside gas station, while John chivalrously punches a motorcycle thug who makes a nasty comment about Brea’s curves outside at the pump. With this setup established, Traffik eventually devolves into grindhouse, incorporating some swimming pool hanky-panky, a home invasion scenario, a life-threatening pursuit in a darkened woods (to quote Thelma Ritter: “Everything but the bloodhounds snappin’ at her rear end”), and finally a sleazy woman-in-chains mise en scène straight from a Roger Corman drive-in flick, all followed by a solemn coda about the international human trafficking epidemic, as if that could rehabilitate the movie’s salacious tone. It’s enough to make you gag, assuming you’re not already holding your nose.

In the dull first half, Patton (who has a Pam Grier vibe going on) vainly tries to make things interesting, but it’s not until this movie shifts into Perils of Paula mode that she finds her groove, even if the context is thematically creepy and wrongheaded. Once Brea’s fight-or-flight instinct kicks in, Patton infuses the character with a strength that seems humanly possible. If this movie demonstrates anything, it’s that this capable actress deserves better than just being known as the ex-Mrs. Robin Thicke. While most of the villains here either sport nose pimples or British accents, a stern Pyle is all pursed red lips in the role of a law enforcement officer who (spoiler alert!) smells bad from the get-go. When she starts snarling orders and insults once her true identity is revealed, the ridiculous Traffik sniffs at the edge of camp, if only for a precious moment.