There's no more abused term in horror fiction than Lovecraftian. It was misapplied to Justin Benson and Aaron Moorhead's second film, 2015's bizarre romance Spring (much to the filmmakers' chagrin), just because it had a few tentacles. But with their quixotic, enigmatic, tender, and sometimes hilarious third feature The Endless they find the core of the truly Lovecraftian – that, whatever is out there in the universe, you really don't want it staring at you.

Fans of their debut, the mischievously brilliant Resolution, will know it's a bad sign when a box with an odd tape turns up on the doorstep of the Smith siblings. They have been living in abject poverty ever since they ran away from what the elder brother Justin (Benson) calls a UFO death cult. But what Aaron (Moorhead) recalls is a bunch of nice people, living as a commune on a ranch, eating proper food, and he convinces Justin to go back for just one day, one night. After all, anything has to be better than their failing home cleaning company, and eating dried ramen in other people's kitchens, right?

Not necessarily. Not when the cult is not as wrong about a mad god in the woods as Justin would like to suggest (after all, he was wrong about the mandatory castration deal). Something is lurking in the skies and in the lake, just beyond the limits of our puny physics. Something that likes a good story …

Whatever you think The Endless is about, it’s not, because Benson and Moorhead have yet again taken a dozen standards of genre storytelling and recrafted them into something fascinating, obtuse, and ultimately character-driven. As either actors or creators, they are in every frame of this film, and their longtime offscreen friendship translates fluidly to the looping, intricate narrative. So, while this is still a tale of cosmic horror, don't go in expecting flailing limbs and goo. Instead, the duo bicker with an easy familial looseness, exploring their old communal home and their own tense relationship. Benson gives Justin a tired intensity, as the brother who has had to become the de facto head of their dysfunctional household. Meanwhile Moorhead's onscreen Aaron evokes a young Cary Elwes, somewhere between the innocent charm of The Princess Bride's Westley and the awkward idiocy of Jerry the stepdad in Liar Liar. Together they give the cosmos-mangling insanity a grounded truth and a light hilarity: building on the concepts of Resolution, and even bringing back some familiar characters, without creating anything so threadbare as a sequel.

The Endless questions how easily people get stuck in a rut. It just uses mad gods, time loops, and impossible physics to get there. If there's such a thing as observational comedy horror, this is it. 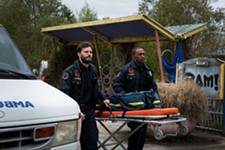