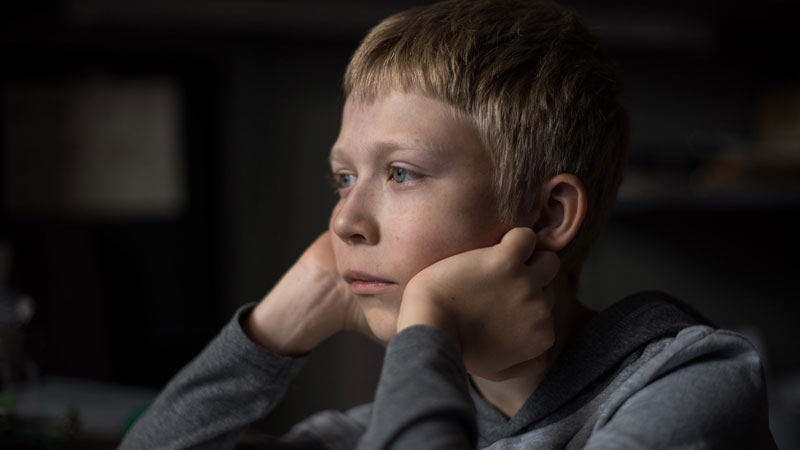 An inertial, adversarial marriage caught up in its own slow and steady tailspin becomes even worse when the couple’s only child vanishes into thick air one day. Indeed, this portrait of Russian lower-middle-class despair and desperation is clouded over with a super-slow-burn miasma of dread and disconnection that, while overlong, resonates with the sheer randomness of modern life. Director Zvyagintsev (Leviathan) exposes the viral, negative effects of technology and the workplace on a marriage, and the communication issues – or total lack thereof – common to even the most banal couples overwhelmed by the mad pace of a world evolving too fast.

Set in a colorless Moscow suburb in 2012, semi-separated couple Zhenya (Spivak) and Boris (Rozin) kill time before a presumed divorce by bickering and taking other lovers to salve their mutual woundings. She runs a salon, he’s a corporate drone of some insubstantial kind, and their 12-year-old son Alyosha (Novikov) is beloved by neither even as the pair attempt to sell off their longtime apartment. Certainly the occasional visit by the realtor is more important than Alyosha’s fate to these two selfish individuals, but Zvyagintsev parlays this miserable family into a granularly realistic depiction of three lives completely out of balance with one another.

When the child goes missing, there’s a patently depressing muddle of non-options available to Zhenya and Boris. The Moscow police are of little to no help, explaining to Zhenya that the family would be far better off hiring an all-volunteer organization to search for the boy. Add to this the fact that Boris’ mystery job views divorce among its workforce as a sin on a par with simply not showing up for work, and the fact that both spouses' new flames don’t seem to know what makes them tick either, and Loveless is a grim picture of mutual enmity and emotional upheaval. All three leads give subtly wrenching performances that wouldn’t have been out of place in Ingmar Bergman’s oeuvre, and the film’s more forthright depictions of self-inflicted tech-rot – selfies galore, constant attention to an iPhone’s black mirror at the expense of “real life” – make this less a Russian arthouse import than a doleful slice of anti-life. See it with someone you don’t love that much.