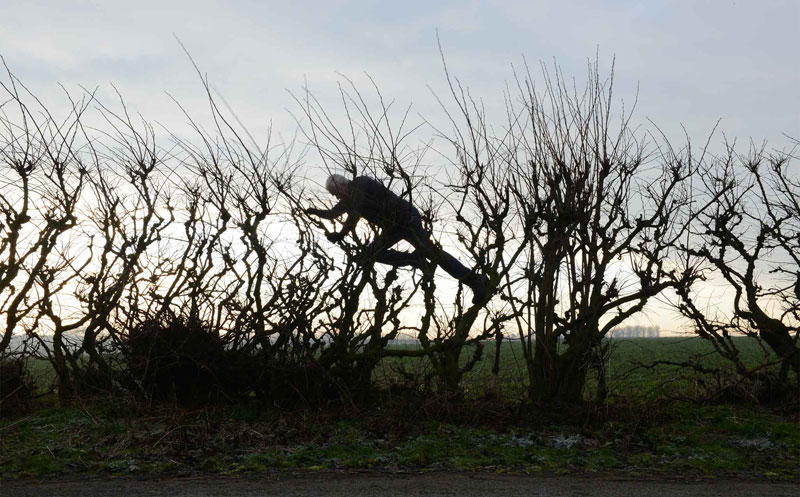 Leaning Into the Wind: Andy Goldsworthy

Iconoclastic British environmentalist and sculptor Andy Goldsworthy doesn’t experience the world in the same way the rest of us do. Using more than just the conventional five senses, he profoundly intuits his surroundings as if in a meditative trance, mentally and physically absorbing the details of his environment like a forensic scientist in the pursuit of a unique artistry that’s brought him worldwide acclaim.

Goldsworthy sees the possibility of creation everywhere. Whether it’s the adornment of a fallen giant elm, whose broken limbs violently splay across the course of a ravaged creek, with colorful leaves and petals (among other things) carefully applied to its decaying trunk from year to year, or the similar embellishment of the brick steps of a stone staircase ascended and descended by pedestrians every day in a nearby city, the ephemeral artwork depicted in the documentary Leaning Into the Wind imposes a fleeting order upon the varied landscapes Goldsworthy encounters. He uses elements supplied by nature – rocks, twigs, reeds, boulders, mud, leaves, petals, snow – that eventually succumb to those settings’ natural state of entropy. Even the more sophisticated site-specific installations on display here (including the austere, open-air sarcophagi called “sleeping stones” seemingly strewn across the Spanish countryside) never dominate their milieus but rather humbly enhance them. For some admirers, there’s a reverence in this artistry, one that glimpses the face of God.

Leaning Into the Wind is the second documentary about Goldsworthy and his work, both directed by German cinematographer Thomas Riedelsheimer. (The first, Rivers and Tides: Andy Goldsworthy Working With Time, was released in 2001.) While this follow-up film (it’s not really a sequel, per se) often feels more like a cinematic coffeetable book than a documentary, the filmmaker and his subject matter clearly make a good team. When the artist attempts to explain his creative process, words elude him as he rambles on without finishing his sentences, as if his thoughts were a work in progress themselves. But when Riedelsheimer films an intently focused Goldsworthy slowly moving atop a cluster of small mesquite-like trees like a human insect, carefully navigating the thicker branches to support his slight build as he progresses from one tree to another, no amount of words could similarly express the man’s obsessive modus operandi in approaching his profession. Or could communicate the satisfaction it brings him, as when he’s frequently shown creating “rain shadows” by impulsively lying on the ground in a still pose during a drizzle, no matter where he may be, until he abruptly walks away to leave a momentarily dry outline of his body commemorating his presence there. It’s Goldsworthy’s version of a snow angel, a simple transitory image that will make you feel oddly happy during its short, earthbound existence. Rivers and Tides
Andy Goldsworthy's art of the ephemeral in nature is granted permanence in this feature documentary.