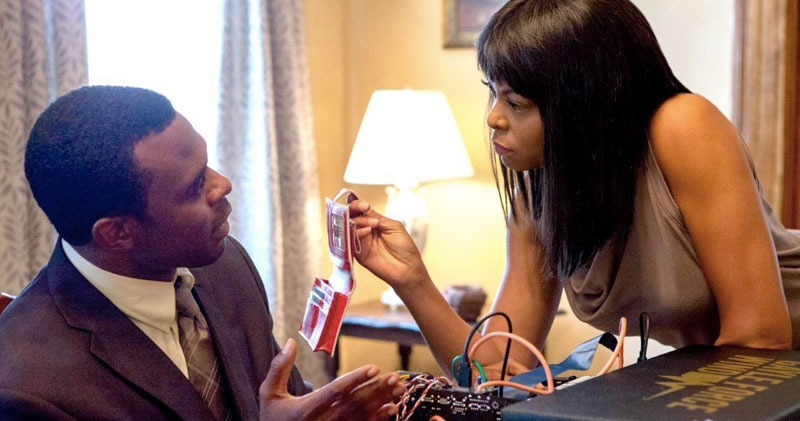 What is it about strong women that attracts shit dudes? Is it a particularly nurturing nature, a dominant personality, or the fact that they “want” rather than “need” men? According to Tyler Perry’s Acrimony, the answer is simple: Those bitches be crazy.

The film starts near the end of the story. A wide shot shows Melinda (Empire’s Henson) sitting in a therapist’s office. The therapist (voiced by Woods, a dialect coach) remains offscreen (and doesn’t even have a name) while Melinda recounts the events that brought her to this point (court-ordered anger management), starting with meeting her ex-husband Robert (Bent) in college (the younger counterparts played by Alexus & Madison). Despite red flags (namely philandering and manipulation) and the fact her family hates his guts, the two wed and he pisses away the inheritance she received when her mother died (a house plus $350,000) while he works on an invention, a self-charging battery, that’s supposed to make them rich.

After 18 years working day and night to support them, Melinda is more than a little weary and Henson’s face carries the dead weight with the gracious air of a lioness. When old flame Diana (Stewart) bumps into Robert while working at the company he’s been courting for his invention (a questionable choice of character reuse), Melinda goes completely batshit because she’s convinced he’s cheating on her (again), and she’s kinda right. She asks for a divorce and he immediately gets engaged to Diana. Melinda holes up at home with a shitload of booze, whiling away the hours stalking them online and scratching out Diana’s face in pictures (because that’s definitely not a cliche).

Divided into chapters, precursory visuals of dictionary definitions appear onscreen (a device that isn’t nearly as clever as Perry thinks it is), starting with the title of the film – to the ear “acrimony” is not far off from “matrimony” – and moving on to “inexorable” and “deranged.” It was the latter that gave me pause, because I thought “obsession” could just as easily have been used but would have had a more neutral connotation – or even “monomania,” which could be applied to both parties. “Deranged” marks a turning point: Our heroine becomes the villain. It made me wonder, in light of #MeToo: When women tell their stories, aren’t we supposed to believe them? Well yes, we should, unless we can categorize them as “crazy” or “psycho” and then their tragic fates become acceptable (a concept that echoes the Victorian-era “madwoman in the attic”). With this latest thriller (comedy? My fellow audience members were laughing at scenes I highly doubt were intended to be funny), Perry implies that not only does she belong there, but she forged every link in her chains.