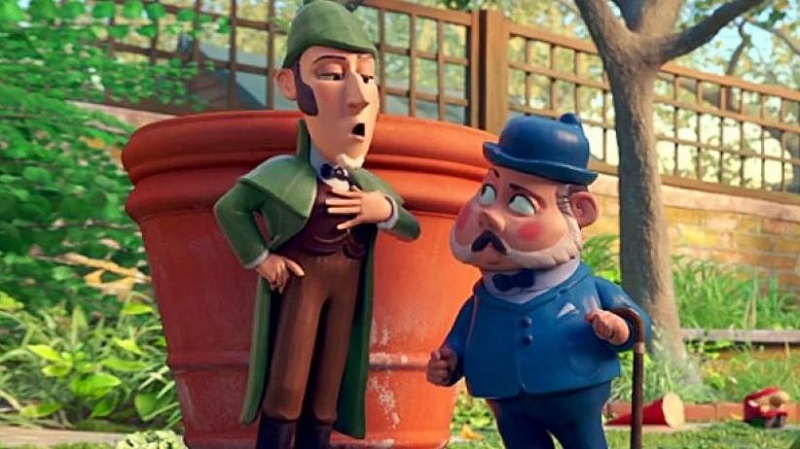 Remember the eyeball-scrapingly unfunny Gnomeo and Juliet? Remember watching it and thinking, “Really? It’s 2011, and we’re still doing Borat mankini jokes?” Well, welcome to Sherlock Gnomes, a sequel seven years past its sell-by date, and 12 years after Sacha Baron Cohen made audiences cringe at his swimsuit choices. So, ask yourself – as I did on several occasions during the seemingly endless, unfunny, cheap, and unimaginative shiny CG mess that is Sherlock Gnomes – who in the blue hell is this film aimed at?

The original was all predicated on a terrible pun (it’s Romeo and Juliet, but with gnomes. Garden gnomes. Geddit?), bolted on to a perfunctory bootleg Toy Story mechanic about how gnomes can move when people are not looking. But since Shakespeare didn’t write a sequel for his star-crossed lovers, this time the plot trundles slowly into a Sherlock Holmes (Holmes! Rhymes with gnomes! Holmes gnomes) pastiche, as the ceramic garden decorations are transplanted to London, where evil pie mascot Moriarty (don’t ask, just know that Demetriou tried his best) has been kidnapping lawn ornaments. Why? To annoy his nemesis, Sherlock Gnomes (Depp, ham-fisting his way through another script) and his long-suffering sidekick, Gnome Watson (Ejiofor). Annoying as they are, Gnomeo and Juliet (McAvoy and Blunt, both of whom must be cursing their agents for letting sequel clauses sneak into their contracts) begrudgingly join forces with the detectives to save the day.

What hellish pitch meeting green-lit this baffling, sloppy mess? Every minor character from the original is crammed in for a compulsory cameo (but little more – suck it up, fans of ‘Shroom). Even Gnomeo and Juliet are peripheral. Plot and character development are afterthoughts, squeezed in between unfunny sight gags (Mankini jokes! In 2018!) and lame action sequences. Worst of all, a character actually flaunts the fact that the plot is absurdly complicated, relies on implausible coincidence to a brain-bending degree, and even then does not make any sense. Yes, this is a cartoon, but there are several moments in which it feels like the animators just turned off the physics engine. Fans of the first film – at least some of whom, I presume, must exist – will feel ill-served by this lazy, nonsensical retread. Younger kids will be baffled by references to BBC’s Sherlock’s mind palace, and anyone old enough to parse those references will be bored senseless, and possibly a little annoyed. The only person who can possibly feel good about this whole mess is Elton John, who inexplicably once again licenses his songs for the soundtrack. Hope the checks cleared, Rocket Man. 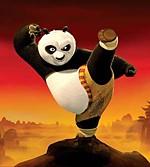 Kung Fu Panda
Jack Black's animated Po may be an animated panda bear, but deep down, he’s really just a nerd with a pop-culture obsession.