I’ve spent a fair amount of time thinking about what the title Midnight Sun even means. I spend a lot of time thinking about what a great number of things may or may not mean. It’s the burden I drag around. Is it a reference to the fact that at midnight the sun is on the other side of the world, or is it a curious name for the moon? Perhaps it’s just not-the-best-translation of Taiyō no Uta, the name of the 2006 Japanese original, but I’m (unfortunately) not a language scholar, so I can’t be certain either way. What I can tell you is that this remake kind of sucks.

Directed by Scott Speer (Step Up Revolution) and scripted by first-time screenwriter Eric Kirsten, this teen romance is a princess-locked-in-a-tower modern fairy tale that echoes last year’s Everything, Everything. Katie Price (Thorne) has rare genetic condition xeroderma pigmentosum, which basically means she is extremely allergic to the sun – even a few seconds’ exposure can be detrimental. Locked in the house all day behind a special window screen, she spends all her time with single dad Jack (Riggle) and quirky sidekick Morgan (Shephard). Sometimes she gets out at night to busk at the train station, where she meets mouthbreather Charlie (Schwarzenegger), a neighborhood boy with the charm of a doorknob and the lizard-person looks of one of Trump’s sons, who she had fallen in love with already as she watched him skateboard past her window all these years. Love is requited – a miracle! – but she keeps her XP a secret from him for way too long, and complications ensue.

The bones of the story are good, and there are positive themes, like how people are defined by so much more than a disease they have, but there are too many mechanical errors that just can’t be overlooked. Thorne does well enough carrying the awkwardness of the Little Mermaid walking on land for the first time, but Riggle is all wrong for a serious role. There’s chemistry between them, but it feels inappropriate at times (like when Dad mentions his daughter looks “hot”). The dialogue is boring, and there are so many cheesy chipmunk-smiles exchanged that I often felt like I was watching a gum commercial. Its one saving grace is the cinematography by Karsten Gopinath (whose past work also includes Step Up Revolution along with various music videos) – landscapes bathed in deep blues and gorgeous goldens, the colors of young lovers longing for just one more moment. That being said, whatever a midnight sun actually is, its rays are pretty weak. 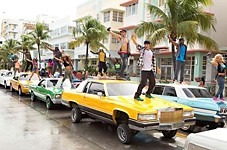