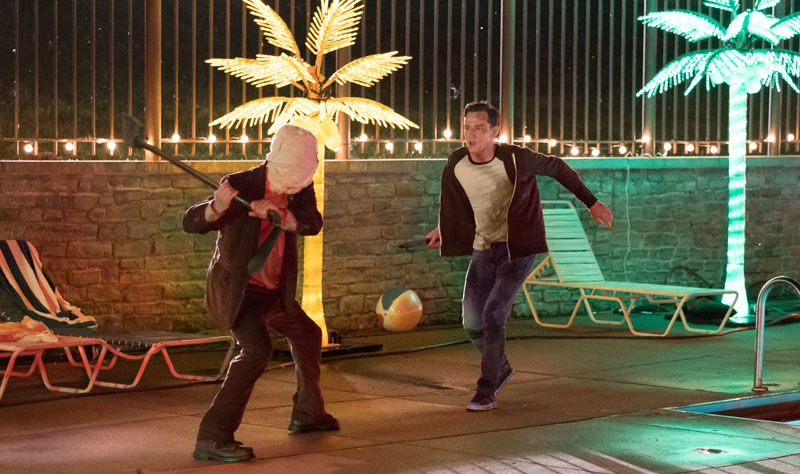 The Strangers: Prey at Night

The creepily masked “strangers” of the 2008 original reignite their reign of nihilistic horror in this sequel, which arrives oddly 10 years after the first film. Bloody, cruel, and senseless murder is these strangers’ thing, especially when delivered with an ironic touch. There’s no helter-skelter race-war paradigm guiding the murderers’ actions, no precipitating road rage or underlying psychosis, no deep-seated compulsions or perversion of logic. These hideous killers who cover their mugs with China-doll masks or a smiley-faced burlap bag commit their deeds for the scariest of motives: no reason whatsoever. Their victims are random, their bloodthirst nonspecific. They’re just “Kids in America,” as the song that blares over the film’s preambular butchery would lead us to conclude.

Parents Mike (Henderson) and Cindy (Hendricks) are sending their petulant daughter Kinsey (Madison) to boarding school for reasons that are never fully spelled out in the movie. There’s mention of Kinsey frequently ditching classes, and she wears a testy teenager’s attitude on her sleeve – needlessly, as it turns out, since the rest of her torso is covered throughout the entire film by an emblematic Ramones T-shirt. Mike and Cindy are driving Kinsey, along with her perfect teen brother Luke (Pullman), to the school, but first stop to spend the night at a trailer community overseen by Cindy’s aunt and uncle. Bad idea. Those masked spooksters who committed the home invasion in the first film have taken up residence in the deserted trailer park and, before long, their mayhem branches out from the claustrophobic confines of the trailer interiors to the great outdoors. And of course it’s atmospherically dark and foggy out there, making the appearance of those masks emerging from the total blackness all the more cinematic. Director Roberts also revealed a knack for eking tension from challenging lighting situations in his last film, the underwater thriller 47 Meters Down. His swimming-pool set-piece is one of the highlights of the film.

The characters, being characters in a horror movie, do dopey things like failing to use a gun in self-defense when given the opportunity, opening doors, or entering spaces from which other sensible people would flee, and walking down lighted paths instead of furtively seeking safety. There is no character development or psychology manifested in any aspect of The Strangers. That’s in keeping with the sense of dread created by the inventor of this franchise, Bryan Bertino, a UT filmmaking alum who wrote and directed the original film and co-wrote the sequel with Ben Ketai. In 2008, star Liv Tyler asked the invaders why they were attacking her family and received the senseless answer, “Because you were home.” The identical question is posed in Prey at Night, and another version of the same meaningless answer is given by one of the ghoulies: “Why not?” Ultimately, what is scarier than a world without reason? The fear fuels our human quest for God and meaning in the universe, and touches deep-seated nerves in our moviegoing experience that cause us to instinctively clasp movies that mimic those anxieties despite their lack of anodynes or solutions. Why not, indeed? 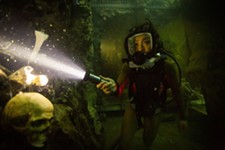 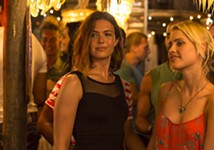