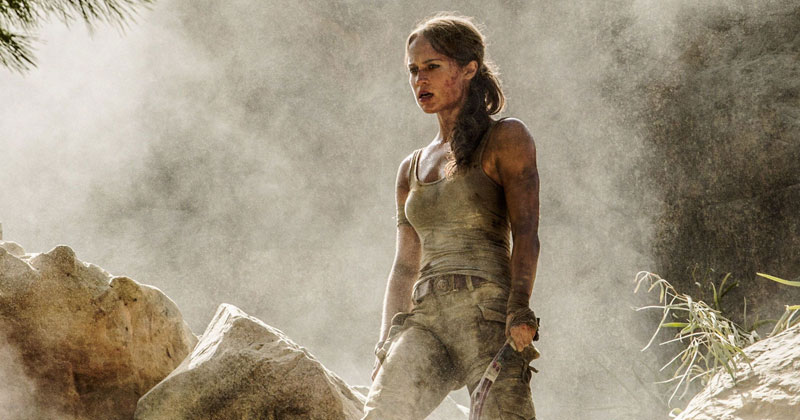 This new iteration of Ms. Croft, played in a far more realistic fashion by Vikander (of Ex Machina fame), is somewhat more serious in tone, but altogether more fun to watch. An update, intentional or not, for our current times, Croft here eschews gunplay over various forms of martial arts mayhem and the humble but extremely effective bow and arrow. Color me aquiver. Croft, leaner, meaner, and less the wealthy scion of Britain’s landed gentry than previously, instead looks like she recently forsook soul cycling muscle tone in favor of krav maga, kickboxing, and – no joke – her day job as a London bicycle messenger. Mad skills, indeed.

All of this runs somewhat counter to the Lara Croft gaming mythos, or at least the 2001 movie. Director Uthaug (The Wave), working from a tight script by Geneva Robertson-Dworet and Alastair Siddons, essentially gives us Croft’s origin story. The only daughter of Lord Richard Croft (West, very obviously having a blast), who vanished seven years prior while exploring some plot contrivance that’s not even worth mentioning, Lara is first seen being urged by her aunt (Thomas) to declare her father officially dead and get on with the inheritance already. Daddy’s little girl, or “Sprout,” however, has inherited not only her father’s stubborn perseverance in the face of the unknown but also a healthy slice of his derring-do.

And so it’s off to paterfamilias’ last known location: that old genre film staple Hong Kong. Once there, Lara hooks up with Lu Ren (Wu), a drunken sailor who just happens to be the son of the man who last saw Lord Croft. And off they go, into “the most dangerous part of ocean” between HK and the California coast, as Lu Ren puts it. He is not incorrect. A mysterious island, shipwreck thereupon, musclebound mercenaries, and a clockwork, Oriental crypt sought by a fiendish villain (Goggins) are all in the offing, and what fun it is.

Tomb Raider unapologetically wears its Thirties-era B-movie antecedents on its sleeve while maintaining a very 21st century attitude toward its whip-smart and realistically tough (yet vulnerable) protagonist. That old RKO Radio Pictures logo with the transmission tower beaming out cinemagic from atop the globe wouldn’t be out of place here.