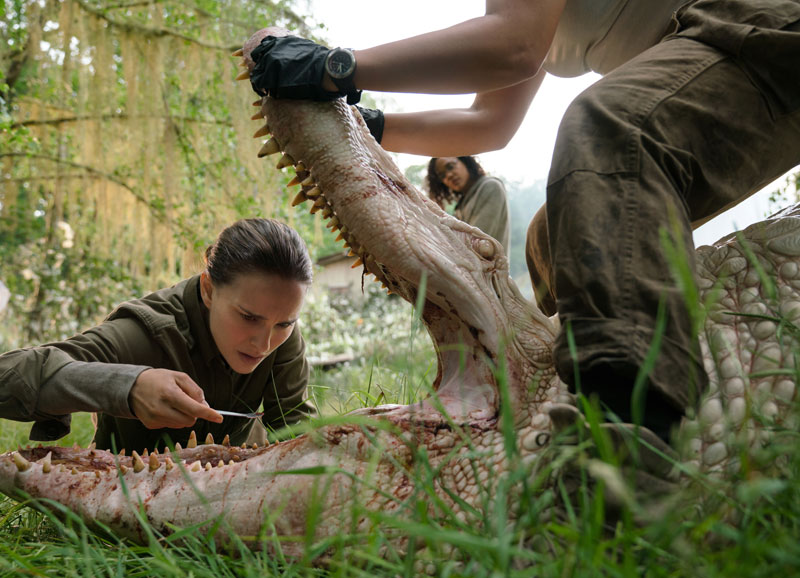 I gather the taxonomy of Jeff VanderMeer’s Southern Reach novels goes something like, family: speculative fiction; genus: Weird fiction; species: New Weird. In adapting Annihilation, the first book in the trilogy, writer/director Alex Garland has seemingly pledged fealty, attempting a speculative film with “weird” baked into its genetic code. Weird is the film’s watchword, its true north, its “why we fight.” It steers the visuals – the mutated flora and fauna living within the mysterious Area X – and the story, a schematic of flashbacks within flashbacks and a headtrip climax that inevitably begs comparison to 2001: A Space Odyssey’s exit into the mystic. With so much weirdness, then, why does it all feel so ... straight? And why do I feel like a bummed-out tourist gone home with dashed hopes? “I was promised a new-millennium mindfuck, and all I got was this crummy pick-the-bodies-off horror.”

To be clear, nobody promised me anything; still, expectations were raised – by Garland’s encouraging directorial debut, 2014’s Ex Machina, a nearly baked speculative fiction about the responsible rearing of robots, and by VanderMeer’s reputation (highly regarded, though I admit I haven’t the read the books). To continue the caveats, that “pick-the-bodies-off” observation isn’t much of a spoiler – the fates of certain characters are revealed in the film’s opening minutes – but if you want to go into Annihilation blind, better skip to the last paragraph.

Natalie Portman plays Lena, a biologist and academic, former military. Her husband Kane (played by Oscar Isaac with an unplaceable accent) was sent on a mission into Area X, a stretch of land impacted by some kind of extraterrestrial object and irrevocably altered by it. Every mission going into Area X has failed, and its shimmering borders are slowly expanding, threatening to swallow cities and even states whole. Hoping to find answers, Lena volunteers for the next exploratory mission – this time, an all-female unit made up of scientists and medical personnel.

I am all in for a “sheroes of STEM” actioner, and Garland really has cast this thing to perfection, including Jennifer Jason Leigh as a psychologist who would most certainly fail her own psych evaluation, Tessa Thompson as a physicist carting heavy emotional baggage, and Gina Rodriguez, gleefully vinegaring any memories of her sweeter-tempered Jane the Virgin character. But as they tromp through Area X and tangle with its weirdnesses – navigation and communication instruments gone haywire, a disorientation that causes the unit to lose memory (whole days seem to disappear), and that mutated fauna, out for the kill – Annihilation settles into a routine-feeling horror.

The performances aren’t routine, and neither is the score by Ex Machina composers Ben Salisbury and Geoff Barrow, adding an emotional complexity with its mix of heartland guitar, spooky AF strings, and submerged-sounding synths. But those whale-song-like synths recall in fits Arrival’s score, and by association how much better that film handled a story with open-ended questions; also, how confident you felt its mysteries were by design, and how its open-endedness encouraged the audience to range and ruminate.

Annihilation doesn’t have Arrival's same sure hand at the wheel, or interest in sparking the audience to spin it. Intriguing wrinkles – that memory loss in Area X, say – are introduced, then drop away. A surreal landscape is suggested, but stops short of emphatic realization. Whether digital or analog, we’re in an age when cinematic effects can convince us of anything, transport us to anywhere. I’m stumped as to why Garland chose to be coy about the transformation of one of his characters – more movingly: her acceptance, our ache – that takes place entirely offscreen. Maybe he blew his FX budget on that decapitated head?

That’s just one unknowable among many, in a film that seems to exalt the unknowable, maybe because “You don’t get it” is a more strategic posture than “Nothing to see here.” But the latter is where I ended up, exhausted by the journey and bored by its conclusions.