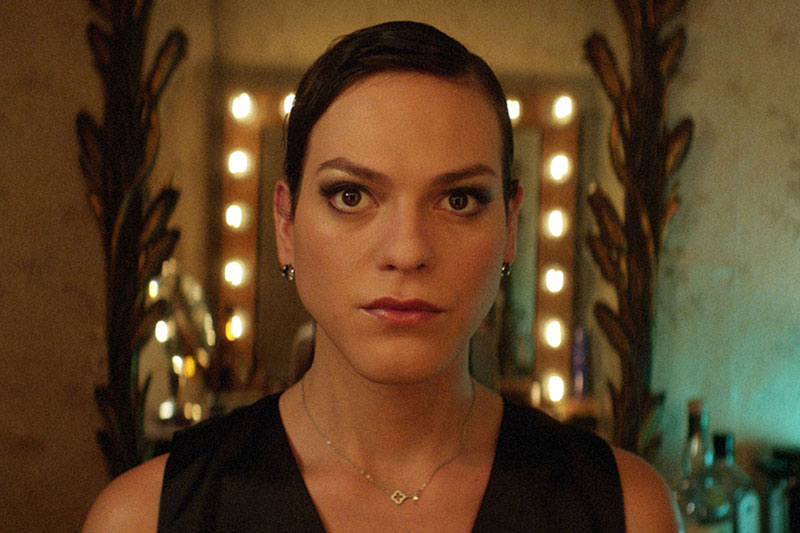 The masklike countenance of newcomer Daniela Vega in the titular role of Marina Vidal haunts the Oscar-nominated Chilean film A Fantastic Woman like a ghost inhabiting a world that often does not wish to see her. It’s a face that purposely reveals little about someone who must show it each day to people who view gender identity only in binary terms. As the young trans female grieving the sudden death of her 30-years-plus older lover, Vega delivers a delicate performance, going from vulnerability to defiance with just the slightest nuance in an otherwise impassive facial expression. An actress with more screen experience might have infused the character with a broader range of emotional technique, but Vega (a transgender woman making her movie debut here) gives her lived-in portrayal here a strong dose of self-preservation, a defense mechanism undoubtedly born from the character’s fear of drawing unnecessary attention to herself, and her desire to blend into the crowd as much as possible.

It’s an intuitively smart choice on Vega’s part, one that’s admittedly perplexing at first but ultimately astute. When Marina brings the ailing Orlando (Reyes) to the emergency room after an evening celebrating her birthday, she is immediately viewed with suspicion by the admitting doctor, based on her physical appearance. (The physician assumes the bruises and contusions on Orlando’s body, which resulted from a tumble down the stairs during an aneurysm, were inflicted by Marina, whom he believes to be responsible based solely on the misperception she’s just a man dressed like a woman.)

But this insensitivity is nothing compared to the horrible persona non grata treatment inflicted by most of the members of Orlando’s family (the exception: his sympathetic but spineless brother), who are still reeling from the dead man’s unforgivable decision to leave his wife for what the spurned spouse calls a “perversion.” In a wonderfully surrealistic scene breaking from the film’s tormented reality, Marina literally walks against the wind, her body leaning forward at an obtuse angle as she determinedly plods forward.

Without preaching from the pulpit, A Fantastic Woman powerfully communicates the hostility and hatred that persons such as Marina encounter simply due to their otherness. In its way, it resembles those Hollywood-era message movies like Gentleman’s Agreement and Pinky, but without the self-congratulatory importance that weighs those films down with all the subtlety of an iron anchor.

While Marina’s resolve to properly mourn Orlando and view his body one last time informs the principal narrative, on a more artful level the film is a story of emancipation, as a resilient Marina comes to appreciate her capability to survive without someone to take care of her. (A brief scene with her music instructor suggests she has a pattern of seeking out father figures.) In the film’s coda, when she takes the stage to beautifully perform an aria (Vega is a classically trained opera singer), you see a hint of contentment in her face for the first time, an understated joy emanating from within. It’s a lovely, hopeful way to end this movie. And as for Vega? Well, let’s hope it’s not the last we see of this mujer fantástica