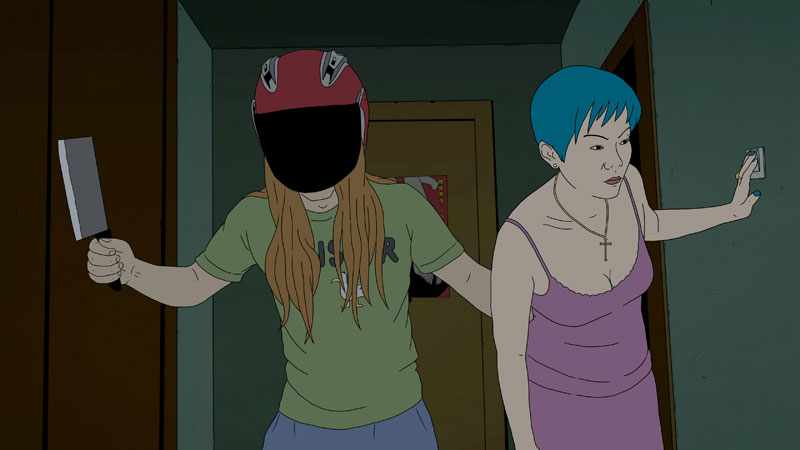 Have a Nice Day

Unlike Japanese and Korean cartoons, the world of Chinese animation has been closed off to most viewers. Gangster drama Have a Nice Day may not completely resolve that deficit, but it's at least a little insight into the industry: or rather, into the work of one of its more controversial figures, Jian Liu, whose street-level crime drama has got him slightly crosswise with Beijing (so much so that the Chinese government had this movie pulled from the Annecy International Animated Film Festival).

No surprise, since it scarcely paints China in a glowing light, as the desperate Xiao Zhang (Zhu) rips off gang lord Uncle Liu (Yang) for a stack of cash to pay to fix his girlfriend's botched plastic surgery. It's one of the oldest noir tropes (underling invokes boss' wrath and must evade capture), but the narrative is subverted by the only smart move – indeed, the only proactive moment – Zhang makes is the initial rip-off. After that, the story concentrates on Liu's world-weary fury, and the cavalcade of lowlifes that derail Zhu's getaway.

Idiocy and brutality are the order of the day in what is effectively a handmade project for writer/director/editor/chief animator Liu. Even at a curt 77 minutes, Have a Nice Day isn't rushing to get anywhere. Liu concentrates on his elaborate backgrounds as much as the characters, often letting the camera patiently settle on rooms and exteriors before cutting to the languorous action – or, conversely, he'll cut to another sumptuously grimy building or skyline, or just hold on the rippling surface of a lake for a minute or so. It's entrancingly gritty, but the mood is often more somnolent than meditative.

Much of the anti-action involves the underdogs of this Southern Chinese city sitting outside dive bars, or in gutters outside cybercafes and LAN gaming centers, or fantasizing about appearing in propaganda karaoke videos (which are apparently a thing). Zhu at least has the guts to try for something, even as he being chased by Liu's go-to fixer, the laconic but honorable Mr. Skinny (Ma, the most interesting and stylized of all the characters).

The sparse score by the New York-based Shanghai Restoration Project adds a mid-Nineties crime cool, and Liu is undoubtedly aiming for the era's classic creators (the Coens, Beat Takeshi, Tarantino). But his beats are so slow, and the backing story so slight, that the narrative diversions and long-winded, semi-philosophical anecdotes swamp any forward motion. It wants so hard to be Pulp Fiction, but it ends up 8 Heads in a Duffel Bag.

Have a Nice Day, Jian Liu