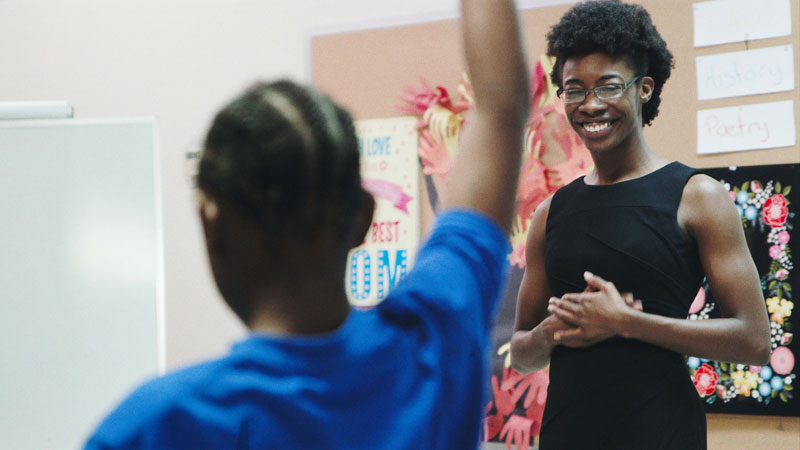 June 15, 2015. Breaion King heads to her teaching job, and ends up being thrown around by an APD cop bouncing her off a truck and the ground, arrested, and left in fear she would become the next Trayvon Martin, or Freddie Gray.

In the Oscar-nominated "Traffic Stop" by Kate Davis, what King went through is as important as how she has dealt with it, and how she personally contends with having every element of her public identity subsumed by what the camera caught, and what was plastered over TV for days. That dash-cam footage creates the backbone of this 30-minute HBO-backed documentary, but Davis' real intent is a broader portrait of King as an African-American woman in modern America. It's a bold ambition, one best executed when King contends with how, even after endless repetition of the footage, she is left to struggle with her life as a political metaphor, when she is so much more than that.

Race seeps into Laura Checkoway's "Edith+Eddie," which tells what should be a highly conventional love story. What threatens the couple's contentment is not that they are an interracial couple, but that Eddie (95) and Edith (96) have found some happiness together in their 90s after splitting the winnings off a lottery ticket. As Edith's daughter Rebecca puts it, they're almost a century old; let them have their joy. But there's nothing as simple as that. Checkoway shows this sweet, happy old pair, who have no clue whether either will make it to the end of the day, caught up in family wrangles, legal wrangles, and ethical questions of when care becomes oppressive.

Checkoway is watching two people who are in love who are dying and whose wishes are being ignored because they are old. Without ever being explicit, or even showing the forces at play, her heartrending and delicate story is about how the aged, and particularly those suffering from dementia or Alzheimer's, are ignored in decisions that affect their own quality of life.

By contrast, "Heaven Is a Traffic Jam on the 405" is about a woman finding a new lease on life and being allowed to keep it. Frank Stiefel's portrait of artist Mindy Alper pulls no punches on her own troubled history of mental health, damaging and inappropriate mental health treatments, her dependence on her mother, and her dysfunctional, possibly violent relationship with her absentee father. It's a solid addition to the "tortured artist" category, and Alper is undoubtedly fascinating in her spikiness. Yet Stiefel's commitment to re-enactments often seems too stylized, much as his unquestioning belief in Alper's own shifting biography lacks a certain incisiveness.