First-time director Jameson Brooks’ Bomb City reads like a recipe pulled from The Anarchist Cookbook: Everyday items which, when assembled, create a dangerous product capable of wreaking havoc and destruction. On Dec. 12, 1997, 19-year-old Brian Deneke was killed after being run over by a Cadillac driven by 17-year-old Dustin Camp during a rumble between punks vs. preps in a parking lot across the street from an IHOP in Amarillo, Texas (nicknamed Bomb City for being the only place in America with a plant that assembles & disassembles nuclear weapons). After a trial involving shameless victim-blaming, Camp was given 10 years’ probation for voluntary manslaughter. (For further context I recommend reading the Texas Monthly article from 1999.)

Bomb City tracks the events leading up to Brian’s death, immersing viewers in the small-town milieu by expertly cross-cutting an intimate show at a punk rock club with scenes from the Friday night football game. What’s interesting here is the similarities between the “acceptable” vs. “unacceptable” outlets for teenage male aggression – although the punks are jovial and inclusive while the jocks bully and berate each other – but there’s nothing more diametrically opposed than the treatment each group receives from the local law enforcement (I’m sure I don’t need to spell it out). The juxtaposition sets the tone for the flash-forward courtroom scenes (in which the defense attorney [Morshower] ponders whether being sent to prison is a “matter of circumstance” … um, duh), but the time spent on the cops crashing the punk house feels a bit drawn-out. The filmmakers (all of whom have an Amarillo connection) do well to avoid martyr-izing Brian (Davis), despite heavy crucifixion imagery in the opening scenes (beautifully composed by cinematographer Jake Wilganowski). The role of villain falls heavily on the shoulders of another jock, Ricky (Huffman), rather than the cherub-faced Cody Cates (Shelton), whose name has been changed presumably because they were unable to obtain Camp’s life rights.

The soundtrack is heavy on punk and hardcore, including some of Brian’s favorite bands. However, the action preceding the tragedy is fueled by a lurching and melancholy score (credited to Cody and Sheldon Chick) where the simpler, more obvious choice would have been to blast Filth all the way through (Brian was wearing a leather jacket sporting their Destroy Everything logo the night he died). It contributes a layer of haunting inevitability to this night, these kids, life in general – a funeral march toward the encroaching millennium, toward the final brutal, bloody scene. The film’s message, which it wields like a war chain, is a timeless one: Don’t be such a dick to people because they look different from you. We all live in Bomb City: One stray match and the whole thing will explode. 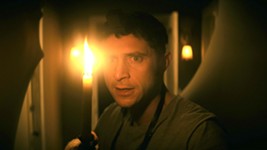