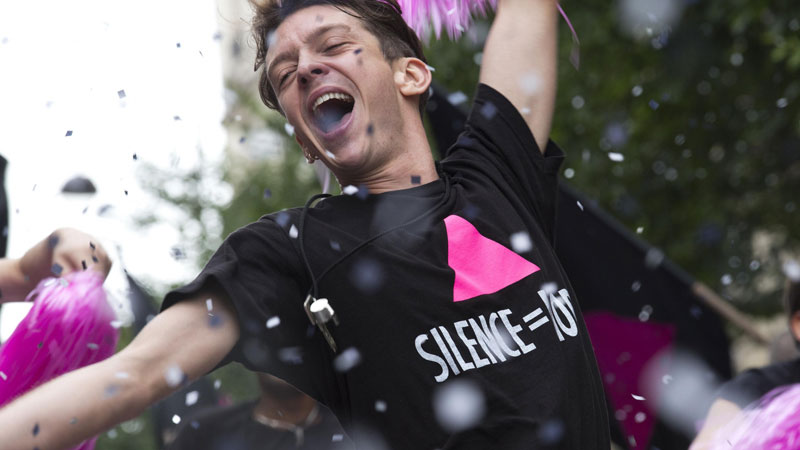 "The personal is political.” This has always been true and always will be true, even if the phrase only came into being around 50 years ago, particularly as a rallying cry of the second-wave feminist movement. Yet the truth of the expression gained extra potency during the early years of the AIDS pandemic, in the decade and a half before lifesaving drug cocktails and combination therapies became de rigueur, a dark time when a diagnosis meant a death sentence and the inaction of governments and pharmaceutical companies was perceived as a sign of complicity. It was a time that saw the birth of ACT UP, a direct-action movement devoted to bold, disruptive public confrontations led by its predominantly gay and HIV-positive membership whose political actions were driven by a devastating personal urgency. The French film BPM (Beats Per Minute), which is set during the early Nineties, captures the spirit of the Parisian ACT UP movement and some of its participants. More than a mere time capsule, this award-winning film also speaks to our present era with its resurgence of identity politics and sense of personal efficacy.

BPM homes in on the passion and necessity of the Parisian group, with which the director Campillo and his co-screenwriter Philippe Mangeot were both involved. The film is historical yet its characters are fictional. Well-captured is the controlled chaos of some of the political actions – takeovers of pharmaceutical companies and conference presentations accompanied by the ear-shattering sounds of whistles and air horns, the throwing of fake blood, the trashing of offices, and the handcuffing of spokesmen. The fervor would then be carried over into late-night dance parties where the political would melt into the personal. Campillo and his cinematographer Jeanne Lapoirie stunningly re-create a sense of the sprawl of people and ideas. Dance sessions strobe into cellular depictions of the virus reproducing, and ACT UP’s weekly strategy meetings unfold in a way that allows participants’ ideas from all corners of a university classroom to ping off one another in a freewheeling but focused manner. Even though all the group’s members may not like one another and diverge in their opinions over the correct course of action (more dancing! more politics! cures vs. vaccines!), they are bound to one another in desperation and understanding.

Campillo brings an artful sense of history to his adept portrayals of the fractious meetings and rowdy actions of ACT UP. Sounds and music combine with nonsequential editing and emotionally gripping sex scenes to force viewers to partake in making sense of the film’s events. Apart from the story of a movement, BPM hasn’t much personal story to speak of until its second half when POZ (HIV-positive) member Sean (Biscayart) and HIV-negative member Nathan (Valois) fall in love and move in together. That may be a little too little of the personal story for some viewers in a film that veers overly long (two hours and 20 minutes) in its focus on the political and a spectrum of characters. However, in our current age in which social media has become the message, BPM is a good reminder that when physical bodies aren’t present on the front lines their silence can very well indeed equal death.