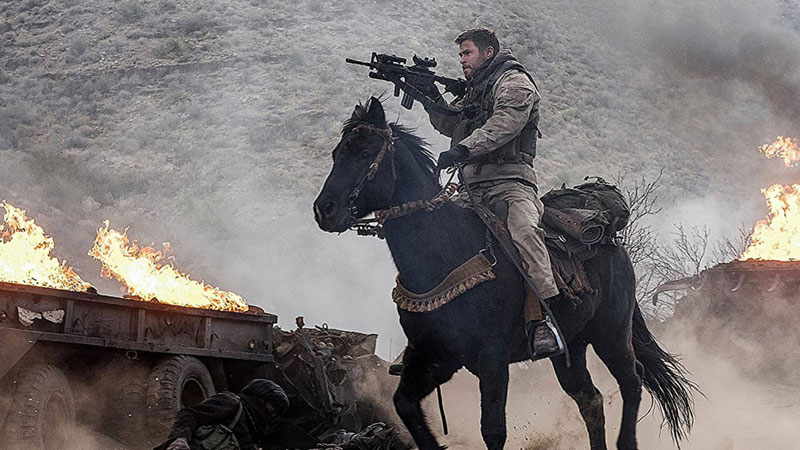 There's a reason why Afghanistan is called the graveyard of empires – a phrase repeated throughout 12 Strong, a depiction of one of the first and most unequivocal victories of the U.S. war against the Taliban and al Qaeda. In the immediate aftermath of 9/11, as the U.S. began the ramp-up to a full invasion, a special forces team was dropped into Afghanistan to help Northern Alliance general Dostum (Negahban) reach the vital stronghold of Mazar-e-Sharif. In a meeting of new and old technology, they would call down laser-guided bombs to clear the way for his horse troops.

This would seem like ideal fodder for a "God, guns, and the Star-Spangled Banner" take on the story. The original source material, Doug Stanton's 2009 history of Horse Soldiers: The Extraordinary Story of a Band of US Soldiers Who Rode to Victory in Afghanistan, was critically savaged at publication for its G.I. Joe-esque depiction of the war and soldiers, and director Fuglsig provides more than enough jingoism to placate producer Jerry “Top Gun” Bruckheimer. Yet he also slides in all the underlying truths that show the near-impossibility of a clear-cut victory. Even as he catches the righteous fury of the squad before they are helicoptered into the unknown, seeking vengeance for the victims in the World Trade Center and the Pentagon, he sidesteps simplistic depictions of the Afghans as binary good or bad. They were, after all, at war before the war came to the U.S., and every time a U.S. soldier talks about “victory” or “going home soon,” the audience will inevitably cringe.

In the wake of politically motivated rah-rah actioners like 13 Hours, 12 Strong would be easy to write off. Instead, it is balanced between two demands: give audiences a feel-good Taliban-buster, while embracing the fact that, after 17 years, the concept of winning in Afghanistan has been expunged from the political lexicon. Sometimes (most especially in the odd, contractually mandated motivating speech) it lurches too far into The Green Berets tropes. From an action standpoint, it fits almost too neatly in the post-Black Hawk Down tradition of modern high-tech combat operations, with the added twist of seeing modern Special Forces on horseback. At the same time, most of the squad are wafer-thin characters, only distinguished by haircuts.

Yet what could have been a flag-waving slog across the beautiful wilderness of Afghanistan (substituted here by New Mexico), interspersed with massive explosions, is instead surprisingly elegant for a blockbuster. That dichotomy is personified with easy, furrowed-browed charm by Hemsworth: suitably lantern-jawed as Captain Mitch Nelson, unproven in battle but there more for his understanding of the bigger picture of the fractious Northern Alliance and its shifting, bloody alliances (as his number two, a suitably craggy Shannon, explains, he just signed up for the world’s most important diplomatic mission).

The greatest nuance comes from Negahban as Dostum. He catches the warrior who has been fighting for Afghanistan for four decades, even if the sides are far more fluid than would be comfortable for Western observers. The Taliban and al Qaeda leadership are, by contrast, pure villains (one scene of a town square execution would seem cartoonish, if not for its veracity), but he takes the long view of history. You leave, you are cowards, he warns Nelson, but if you stay you are our enemy. Truer words, rarely spoken.