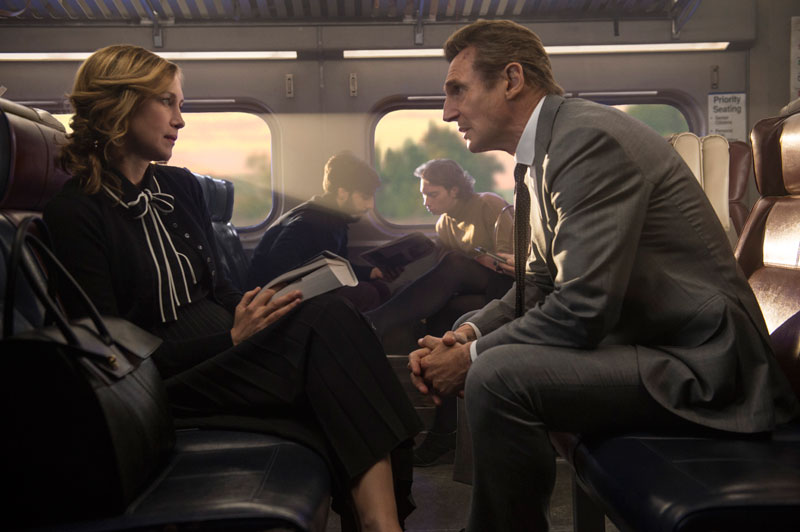 If Alfred Hitchcock’s Strangers on a Train taught us anything, it’s to never engage in hypotheticals. Yet down-on-his-luck insurance agent Michael MacCauley (Neeson) commits that error when a fellow commuter line passenger called Joanna (Farmiga) sits down and poses a question: If he could do one tiny thing, one insignificant act, that would change another person’s life but have no consequence for him, would he do it? Actually, the consequence is that he would get $100,000, which MacCauley desperately needs since he just got fired and his son is heading to college. Of course, the theoretical is real, as he is challenged to hunt down that mysterious person before the train reaches its destination: a seemingly impossible task, but then he is an ex-cop.

That seems a plausibility-stretching coincidence, but nothing is by accident in the first produced script by Byron Willinger and Philip de Blasi. It’s fitting that Neeson reunites with director Collet-Serra for this, as the pair last worked together on 2011’s equally implausible identity switch thriller Unknown: Fortunately, Collet-Serra knows how to keep this kind of material on the rails. He sticks rigorously to the central conceit of a real-time trip from New York’s Grand Central Station, out along the Metro-North line to suburban Cold Spring (he even gets the departure time and trip duration pretty much spot on), and that central sealed bottle sequence is by far the most fun element. An increasingly desperate but focused MacCauley whittles down the train full of suspects with some surprisingly elegant solutions, as all the while the stakes rise.

But there’s a squeaking wheel that just gets more distracting, as the coincidences and seeming godlike foresight of Joanna’s unseen bosses become an increasing strain on credulity. Even as the final act ramps up, the action seems to lose steam, and the torrent of red herrings and obvious dead ends just blocks the tracks.

The Commuter is exactly the kind of post-Taken aging-action-star part that Neeson could do in his sleep, and while he’s not exactly dozing through the script, it lacks his normal grizzled fire and drive. In part, that’s because ex-cop MacCauley has had the life beaten out of him by the corporate life (watch for a not-so-subtle, and very literal, middle finger to Goldman Sachs). But it’s also that we’ve seen this Neeson so many times before (Innocuous-looking ordinary guy with a particular set of skills? Check. Family in peril? Check. Hard-slugging fist fights? Check). Taken reinvented the respected actor as a more mature tough guy. Maybe it’s just time for another reinvention. 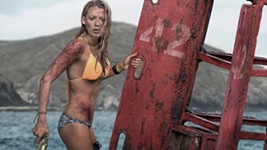