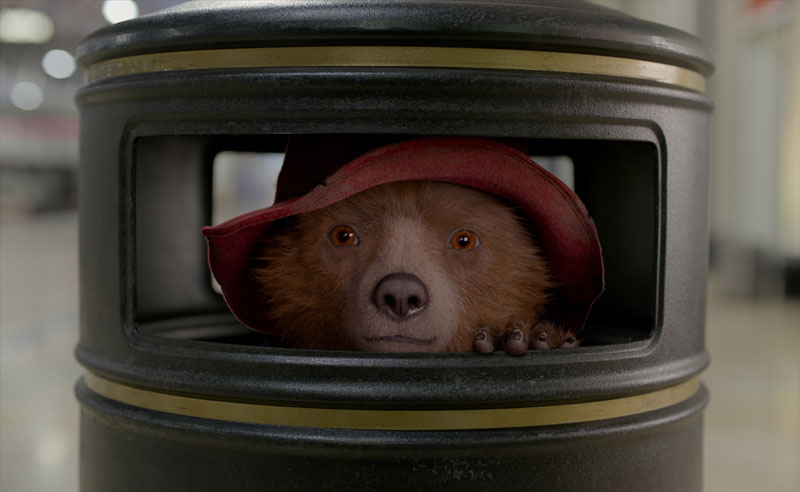 Oh, Paddington, I adore you. Everyone’s favorite Peruvian-born, London-bred, furry, friendly, and above all civil and immeasurably kind (albeit frequently nonplussed) little bear returns in this sequel to 2014’s perfectly executed origin story. As sequels go, Paddington 2 is up to the challenge. It’s neck and neck, or paw and claw as to which is the better, so why not just watch both back to back? That’s what I’ll be doing this weekend, anyway.

The script by director King and Simon Farnaby presents a lively, engaging story without overdoing it. Paddington is still a member of the Brown household (actors Bonneville, Hawkins, Joslin, Harris, and Walters’ Scottish nanny Mrs. Bird all return) in picturesque West London, but this time out the plot revolves around his attempt to find a suitable 100th birthday present for his beloved Aunt Lucy back in South America. To that end, he finds a vintage and valuable pop-up book of 19th century Londinium attractions at Mr. Gruber’s (Broadbent) antiques shop. Resolved, he begins saving his pennies, but before you can say “Crikey, Hugh Grant is getting long in the tooth,” his aging and vain actor-next-door Phoenix Buchanan makes off with the gorgeous tome. Poor Paddington is collared for the theft and winds up doing hard time at Her Majesty’s pleasure. Oh no!

Oh yes, but this is Paddington who, after a minor mishap involving doing his fellow prisoners' laundry and one stray red sock – the surly inmates are thus forced to sport fetchingly pink prison garb for the rest of the movie – befriends the fearsome chef Knuckles McGinty (Gleeson) by schooling him in the finer points of making a marmalade, and pretty soon the whole gang is doing the conga. I would expect nothing less from this exemplary bear.

Like its predecessor, this Paddington redux touches on societal themes in subtle-smart fashion. While Paddington gently grappled with the very real-world fear of immigrants to British shores (Oi! Brexit! Sod off!), this film addresses the currently lacking imperatives of civility, and the small kindnesses that are the bulwark against our baser natures. Mainly, though, Paddington 2 is a comic triumph chock-full of slapstick, heart, and hope. Well done, Mr. Paddington Brown, well done.

Paddington
We extend a big bear hug to Paddington.