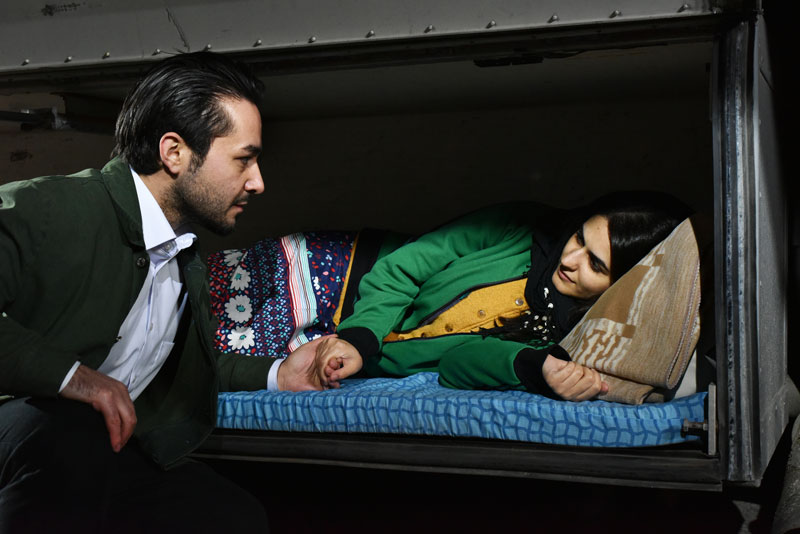 The Other Side of Hope

Two men abandon their former lives and take big gambles on attaining different futures. Neither man in this Finnish film is driven by grandiose dreams of betterment, but rather something more like escape from each one’s deadening present circumstances. Their stories are told in parallel trajectories until, of course (this being a movie, after all), their paths converge. And this being an Aki Kaurismäki movie means that it is a droll tale told with an economy of means, a minimum of dialogue and camera movement, an abundance of rockabilly music, and a bittersweet affirmation of life.

Khaled (Haji) is a refugee from Syria, who lands in Helsinki after being chased onto a Finnish cargo ship by anti-immigrant goons in Poland. He never intended to move to Finland, but his home and family in Aleppo were bombed into extinction (by which nation’s forces he hasn’t a clue), so he and his sister, the family’s only other survivor, take flight through western Europe in search of sanctuary before becoming separated. Liking the culture he finds in Finland, Khaled takes a big gamble and applies for asylum. Meanwhile, Wikström (Kuosmanen, one of Kaurismäki’s stock-company regulars), a middle-aged shirt salesman, leaves his home and marriage, sells his failing business, and gambles the proceeds in a high-stakes poker game for the money to purchase a run-down restaurant called the Golden Pint, whose menu choices are either meatballs or sardines from a can – and beer. Wikström also inherits the restaurant’s three lackadaisical and unpaid staff members. Though we might expect a certain degree of sangfroid from Wikström’s impassive face and stoic demeanor, the new restaurateur proves to be a soft touch when providing his employees with advances on their salaries, and taking in the bedraggled Khaled after finding the refugee sleeping in his alleyway. The group becomes an unlikely family who look after one another (as well as a stray dog) as they try to make a go of the restaurant with a humorous series of cuisine changes.

Kaurismäki’s minimalist style is often compared to that of fellow auteur Jim Jarmusch, but you’ll also find in Kaurismäki’s work (Leningrad Cowboys Go America, The Match Factory Girl, Le Havre) the signature influences of silent comedians, Robert Bresson, Rainer Werner Fassbinder, Sam Fuller, Jean-Luc Godard, Jean Renoir, and more. Kaurismäki, along with his brother Mika, who is also a filmmaker, are Finland’s most prolific and well-known directors, who together are responsible for shaping the lion’s share of that country’s international film footprint.

Dry, ironic humor is also one of the primary ingredients of The Other Side of Hope, and one of Kaurismäki’s signature elements. The chef wipes clean a window that turns out to be pure air; Khaled explains how it’s very easy for refugees to pass through borders because no one really wants to see them; a colleague tells Wikström that she’s getting out of shirt sales, too, because she needs some action after all these years of peace and quiet; the Finnish skinheads who attack Khaled can’t even deduce the immigrant’s ethnicity correctly. The film’s sharp-contrast lighting (another recurring Kaurismäki touch) renders everything a little unreal and made-up, ironically softening the harsher edges of Kaurismäki’s humanistic lessons in kindness. And when all else fails, we can at least be confident that characters in Kaurismäki’s worlds will take another long drag off their cigarettes and go out and listen to some music. They may not hope for better things but neither do they despair the present.