What happens to warriors when their war is gone? The timing of Hostiles – two years after the Wounded Knee Massacre – places it just after the raging fire of the American Indian Wars has died out, and America’s aboriginal people have been left literally in chains. U.S. Army Captain Joseph Blocker (Bale) put many of them in those shackles, or in the ground. Yet he is a man out of time: Not only is he nearing retirement, but his violent legacy is one that Washington wants to put behind him. His final mission seems like a stab in the gut: to escort cancer-riddled Cheyenne chief Yellow Hawk (Studi) and his family from New Mexico to Montana, so that he can die on what is left of his tribal homelands. Both men travel in defeat: Yellow Hawk, from loss and time; Blocker, for knowing that his masters now reject everything he did at their behest.

This is a bloodstained Old West, as shown in the opening moments when a band of Cherokee outlaws butcher a settler family, leaving only the mother (Pike) as a picture of shattered, keening grief. The tone of enduring pain has already been set by dust-scoured Blocker’s tired, hoarse whisper, but watching Pike tearing the soil apart with her bare hands to bury her babies is soul-wrenching.

Writer/director Cooper built the script from a manuscript by the late Donald Stewart. He was best known for scripting the first three Jack Ryan movies, and there are undoubtedly traces of his often surprisingly nuanced take (for Hollywood action scripts) on "good guys" and "bad guys." If the film had been made when originally written in the Nineties, studios would probably have even crammed Harrison Ford into the lead. Cooper’s version feels timeless yet contemporary, diving headlong into the ongoing and often horrific impact of the United States’ policies and attitudes to indigenous culture.

If there’s a shortcoming, it’s that Yellow Hawk and his family seem underwritten, but that’s sometimes a hidden strength. The aging chief has come to terms with his legacy, both as killer and protector: He once led warriors, and now all that is left of that tradition are those raiders that he despises. Yellow Hawk has made a faltering peace with his past, and it is Blocker who must catch up. Studi’s long silences are the rock, rather than the supporting role, to Bale’s self-destructive fury.

Yet Cooper constantly reminds the audience that Blocker’s path is personal, and not truly reflected in a greater whole. Like Yellow Hawk, he must find his own way to live with what he has become. The resolution is uneasy, but it could never be otherwise. 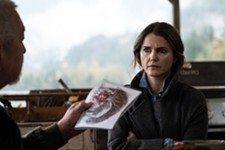