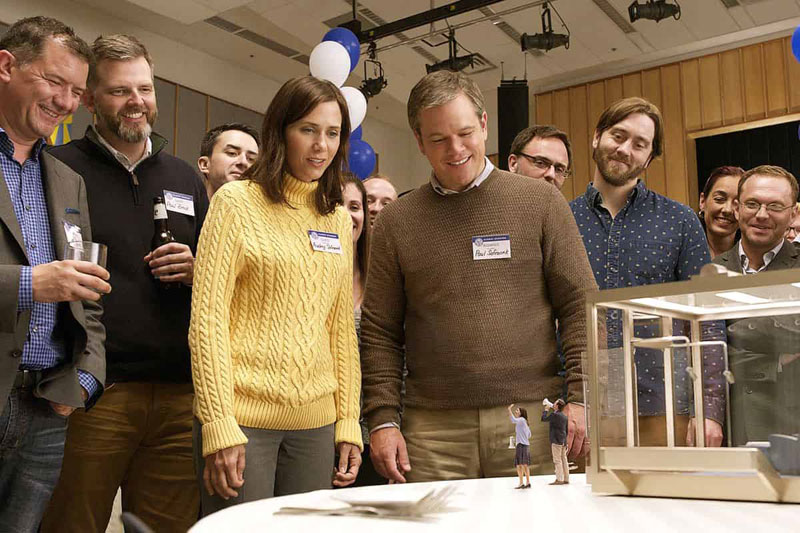 Dense with captivating ideas and visual feats, Downsizing is a packed offering whose oversized ambitions may outstrip its accomplishments. Story elements blend science fiction, comedy, and drama to create tones and a trajectory that wobble in different directions but also keep viewers from easily predicting in what direction the narrative will turn next. Writer/director Alexander Payne and his longtime writing partner Jim Taylor aim for a more expansive storyline here than in such previous projects as Sideways, Election, About Schmidt, and Citizen Ruth. Instead of character-driven stories with biting social commentary, Downsizing is more of a straight-out satire. Matt Damon, as the film’s central character Paul Safranek, is a good-natured and well-intentioned Midwesterner whose Everyman’s journey is a bit of a bore, yet he’s surrounded by friends and love interests whose jagged flaws make them much more intriguing than Paul’s doughy decorum.

The premise of Downsizing is based on the idea that in the very near future, a Norwegian scientist (Lassgård) has discovered a method of shrinking organic matter and, in an avowed attempt to solve the planet’s problems of overpopulation and diminishing resources, 3% of the world’s human beings have chosen to undergo a process called downsizing, in which their bodies are shrunk to heights of 5 inches. They then move into special small communities where, in addition to the warm fuzzies of saving the planet, the residents are lured by the promise of living like millionaires in suburban retirement estates. Shrunken physical sizes equal enlarged bank accounts because a single dollar is equivalent to $1,000 in this new world. Leisure Land, the community that the cash-strapped couple Paul and Audrey (Wiig) choose to move into, advertises its McMansions and retirement lifestyle in which the Safraneks’ $150,000 savings (which is not enough for them to buy the house they want in the regular world) would translate into a tempting $12 million. The cash component is the dirty little secret of places like Leisure Land: Downsizing is a ticket to upward mobility.

However, following an imaginatively delightful sequence outlining the physical process of downsizing, Paul wakes to his new reality and the shock of some unexpected curveballs thrown at him in his new life. Circumstances force him to move from his palatial estate into an apartment building where he’s soon befriended by his party-loving upstairs neighbor Dusan (Waltz), a devilish speck of miniature Eurotrash, and Dusan’s equally charming but smarmy friend Konrad (Kier). As Paul begins to recognize the dark underbelly of the downsized lifestyle, he also comes to understand some of its hidden truths. The community’s socially, financially, and physically disadvantaged are sheltered in makeshift colonias on the other side of a border wall. Ngoc Lan Tran (Chau), a cleaning woman and Vietnamese refugee who was downsized by her former government as political retribution, opens Paul’s eyes to Leisure Land’s disparities, and a character who began as an uncomfortable stereotype of a foreigner grows into the story’s most humane human being.

What I’ve described above represents only about half the movie, and many more events are yet to emerge. That’s part of what makes Downsizing feel like such a conglomeration of ideas and path shifts. A host of cameos (Neil Patrick Harris, Laura Dern, Niecy Nash, Margo Martindale, James Van Der Beek) also glance the screen in further examples of the film’s unpredictability. However nice it is to see Alexander Payne stretching his skills with this sprawling story and special-effects work, the filmmaker might have benefited by taking a downsizing hint from his movie’s title.

The Descendants
George Clooney teams up with Sideways filmmaker Alexander Payne for this funny but tender story that's a little too smug for its own good.