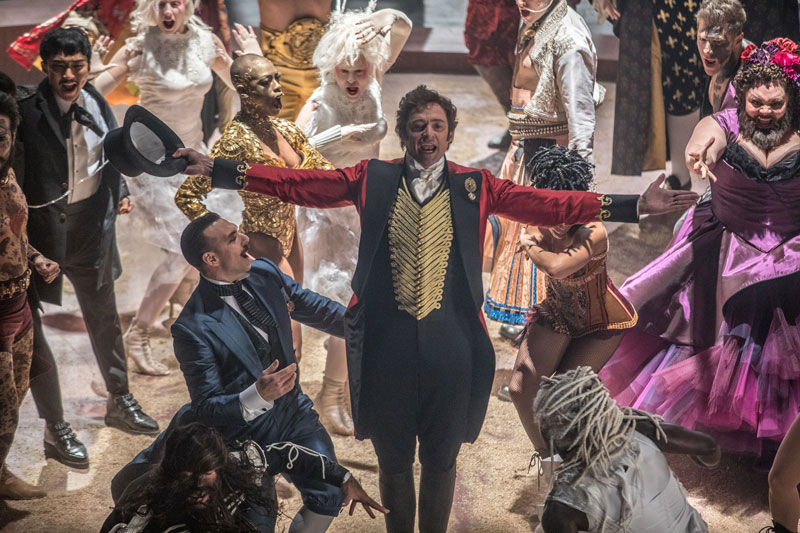 According to this whitewashed biopic about 19th century American impresario Phineas Taylor (P.T.) Barnum, the notorious huckster wished for nothing more than to entertain the people. If you believe that bunch of malarkey, I’ve got a bridge in Brooklyn I’d like to sell you. The Greatest Showman sanitizes Barnum’s early years so shamelessly you can almost smell the disinfectant as it handily glosses over the hoaxes he perpetrated on a duped public and his exploitation of human oddities like the pint-sized General Tom Thumb for profit. Framing his life as a Horatio Alger tale of an impoverished lad who achieves fame and fortune, this movie would have you believe the ruthlessly ambitious entrepreneur was a misunderstood underdog that only a snobbish theatre critic or dismissive father-in-law could dislike. It’s the G-rated version of a man once vilified as the Prince of Humbugs, a family-friendly depiction of a controversial figure made altruistically presentable by Jenny Bicks and Bill Condon’s old-school Hollywoodish screenplay.

Then again, who could resist this airbrushed rendering of Barnum when he’s genially portrayed by nice-guy Jackman, a dashing ringleader outfitted in a brocade ringmaster jacket, top hat, and cane? If anything, the movie shows us a side of the actor long hidden by a lupine pompadour and retractable razor-sharp digits. At first, Jackman’s beautiful tenor voice and athletic hoofing are front and center, deservedly in the spotlight. But as the bombastic musical numbers vie to outdo each other (in one scene, lovebirds Efron and Zendaya appear to be auditioning for Cirque du Soleil), the song-and-dance man gets lost in the scenery, his charisma overwhelmed by director Gracey’s misguided preoccupation with razzle dazzle at full throttle.

The contributions of Oscar-winning La La Land lyricists Benj Pasek and Justin Paul likewise succumb to the film’s American Idol vocalizing, which ascend and descend the musical scale with a cynically calculated emotion. Who knew that opera singer Jenny Lind (Ferguson), the Swedish Nightingale that Barnum introduced to stateside audiences in the quest to legitimize his career, emotively trilled and dramatically waved her arms like Celine Dion at an amphitheatre concert? When the Bearded Lady (a fierce Settle, making a strong impression in an underwritten role) rallies her fellow freak-show performers to assist her in singing a defiant anthem about self-empowerment and inclusivity titled “This Is Me,” all poignancy is sacrificed in the pursuit of making the production number bigger and louder than the ones preceding it. This isn’t a movie musical. It’s a Las Vegas revue featuring songs aiming for high rotation on a Top 40 radio station, one that will doubtlessly enthrall those moviegoers who mistake spectacle for quality. As Barnum infamously did not say, there’s a sucker born every minute.