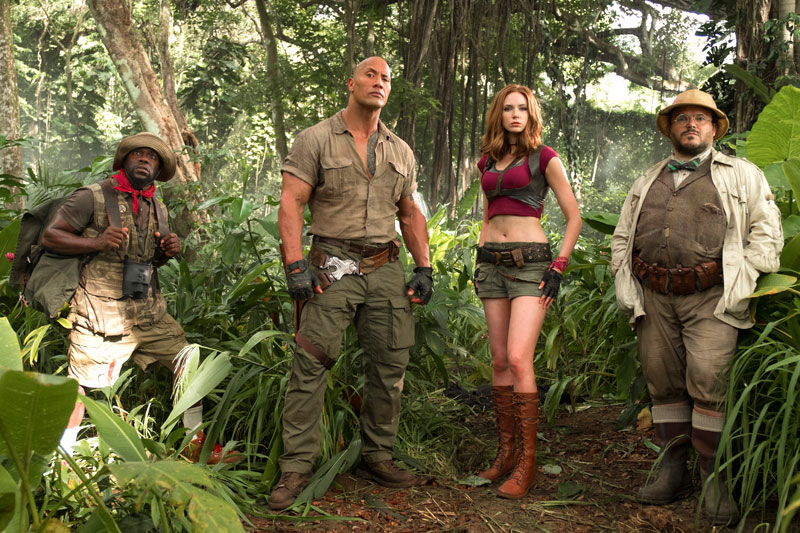 Jumanji: Welcome to the Jungle

It was the sequel for which no one was asking. 1995's Jumanji is a family classic, forever remembered for pushing the boundaries of CG, and Robin Williams' madcap jungle man performance, as a magical board game turns middle America into a pulp magazine-style safari park.

But just as in the film, and the original book by Chris Van Allsburg, this cursed board game is wily, and waits for new players. But board game no more: When Nineties kids are too cool for dice, it becomes a video game, hiding its secrets in a cartridge (look it up, kids). This time, a quartet of modern high schoolers get trapped in its rules, but rather than the world of Jumanji coming to them, they get sucked through the console into the jungle and become the avatars they selected. Nerdy gamer Spencer (Wolff) becomes brawny action tough guy Dr. Smolder Bravestone (Johnson), while his former best friend Fridge (Blain) loses a foot and a half in height and all his football hero strength as Franklin "Moose" Finbar (Hart). Academic outsider Martha (Turner) goes full Lara Croft as Ruby Roundhouse (Gillan). However, it's a Nineties video game, so inevitably there is only one female character, and so selfie-obsessed Bethany (Iseman) ends up in the portly form of cartographer Prof. Shelly Oberon (Black).

The broad and plentiful comedy is in the switcheroo, as Guardians of the Galaxy star Gillan and the man formerly known as the Rock, aka two of the hottest people on the planet, get to play awkward teens. Black in particular relishes channeling his inner future sorority girl, who seemingly was never that far under the skin.

Of course, the original Jumanji had its fair share of menace, and Welcome to the Jungle does not spare the danger. Video game rules apply, so each character starts off with three lives that are lost all too readily, and often hilariously. Getting mauled by jaguars, or stampeded by rhinos, is less glamorous than it sounds. Yet underlying everything, the game is still the same. There's a new Van Pelt (Cannavale), a lost boy in the jungle (Jonas), a quest to fulfill. This game is on rails, but it's a heck of a lot of fun.

Kasdan injects this all with vigor and breezy humor, as this digital Breakfast Club learns to get along. This is undeniably recognizable Jumanji, with its cartoonish swashbuckling, and rampaging African wildlife. Yet what makes this a true high adventure is that it catches the details and nuances of what made Nineties multiplayer console games so infectious and frustrating. Cinematic act structure is replaced by level design, and there are NPCs to confuse and assist. Strip away the characters, and this is the most badass Pitfall! reboot you never played. 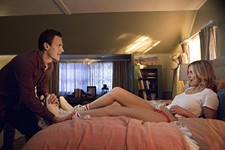 Sex Tape
Cameron Diaz and Jason Segel have escapades while trying to retrieve their sexcapade.