Horror stories and puberty have gone together like peanut butter and jelly since Le Fanu published his vampire story Carmilla in 1871, becoming a well-worn trope that continues to spring eternal. Director Joachim Trier and his collaborator Eskil Vogt have thrown their hat into the ring with Thelma, a beguiling tale of a young woman whose burgeoning sexuality and passage into adulthood coincides with the realization that she has some extremely powerful psychic abilities. And while comparisons to Carrie will most likely dominate the conversation here, Trier’s film seeks a more nuanced tone, and the results yield one of the most striking films of the year.

The titular Thelma (Harboe) has been raised in a rural community in Norway her whole life, brought up by her deeply religious parents: her father Trond (Rafaelsen), a doctor, and her mother Unni (Petersen), confined to a wheelchair and oddly cold to her daughter. But the time has come for Thelma to go to college, and after settling into her dorm at an Oslo university to study biology, she begins navigating the world on her own terms. Things begin to get weird when classmate Anja (Wilkins) sits next to her in the library. A spark of attraction leads to an epileptic-like seizure that waylays Thelma and sends nearby birds flying into the library’s windows (a recurring theme). As Thelma attempts to discover what is happening to her via MRIs and other tests, she and Anja grow ever closer as a couple, with ubiquitous college party scenes and dance club outings. As Thelma grapples with her identity and growing love for Anja, the seizures become more powerful and, ultimately, more devastating.

When, in a shattering third act, Thelma’s hazy history and tragic past are revealed, Trier and Vogt subvert the usual trope of the punishment of female sexuality and instead offer up a more redemptive coda. Thelma is a beautiful and heartbreaking film that is an impressive addition to the coming-of-age story. A lady bird, indeed.

For our interview with the director, see "Joachim Trier’s Thelma Is a Riveting Tale of Psychic-Sexual Coming of Age," Dec. 1 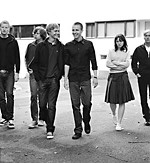 Reprise
This bracingly good Norwegian film is many things at once: portraits of mental illness, obsessive love, the uneasy transition from punk rock youth to “upstanding” adulthood, and fraternal competitiveness.