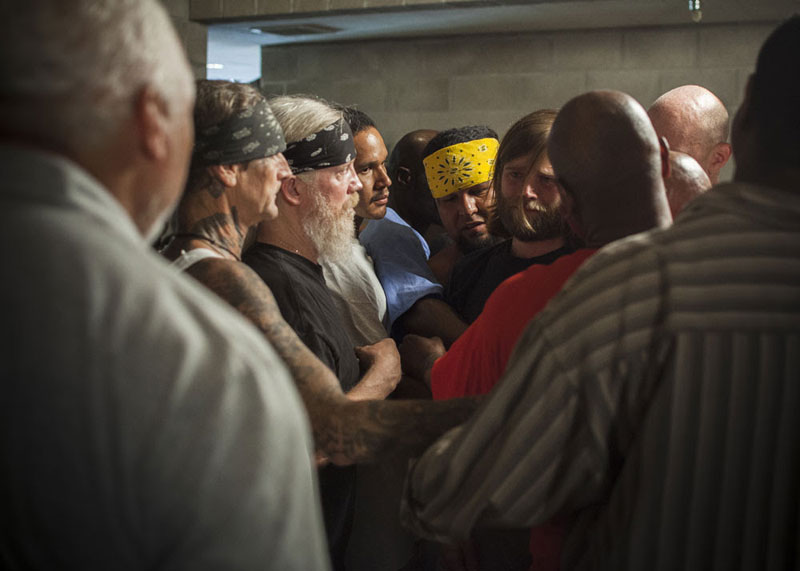 The United States has the highest incarceration rate in the world, followed by Russia and South Africa. There may be a million stories in the naked city, but I’d wager that the 2,220,300 adult inmates that crowd our penitentiaries have the most harrowing and horrific backstories. This wrenching film is often difficult to watch, but it’s still utterly sui generis. It’s a remarkable documentary that takes viewers inside the stone walls and past the guard towers of Folsom Prison.

Twice a year, for four days, individuals from the outside are allowed into a group therapy retreat to attempt to work on their own personal issues while interacting with 20-odd longtimers who also struggle to excise their inner demons. The resulting footage of both the citizens and inmates forcing themselves to recall their greatest fears and failures is heartrending. Call it primal scream catharsis of a sort for all involved. There’s hardly a moment in the doc where someone, on-camera and off, isn’t howling in rage, self-loathing, and grief. It’s a scarily therapeutic act of emotional self-flagellation, but the prisoners have set aside their defining differences at the door. A constantly overheard refrain is “We got your back, let it all out, we’ve all got your back.”

Chief among the inmates participating is the hulking Dark Cloud, a member of the Native American Brotherhood who’s serving decades for almost chopping a man in half with a Bowie knife. ”I wanna be vulnerable,” he says, "and I don’t want to be scared to be vulnerable, because every time I’ve made myself vulnerable I’ve been hurt.” That sentiment is echoed by inmate Kiki: “I want to feel tears, I want to feel what it’s like to mourn, and I don’t want to bottle up that little kid who used to cry when his daddy whupped his ass.”

The citizens taking part in this unique kind of therapy include Brian, a teacher’s assistant who nevertheless has found himself adrift in life, hotheaded and unsure of his goals. And then there’s Chris, a museum associate on the outside but in therapy, a psychologically wounded man with more bottled-up despair and anger issues than he can handle. Throughout The Work both groups metaphorically hack and slash at their traumas, hoping to better themselves by doing so.

Stylistically, co-directors McLeary and Aldous were given complete access to the retreat and wield their cameras like voyeuristic lanterns in a tremendously dark place. The takeaway and the through line that festers within virtually all of these inmates’ tales of woe is absent fathers and broken childhood homes. True, these hardest of the hard men are killers, kidnappers, and gangbangers, but watching them collapsing into shrieking and sobbing piles of fear, shame, and regret humanizes them, startlingly so, and argues for a re-examination of the American criminal justice system and the pressing need to discover the hows and whys of what landed these inmates in the hell they now inhabit, the better to counter such societal failures in the future.