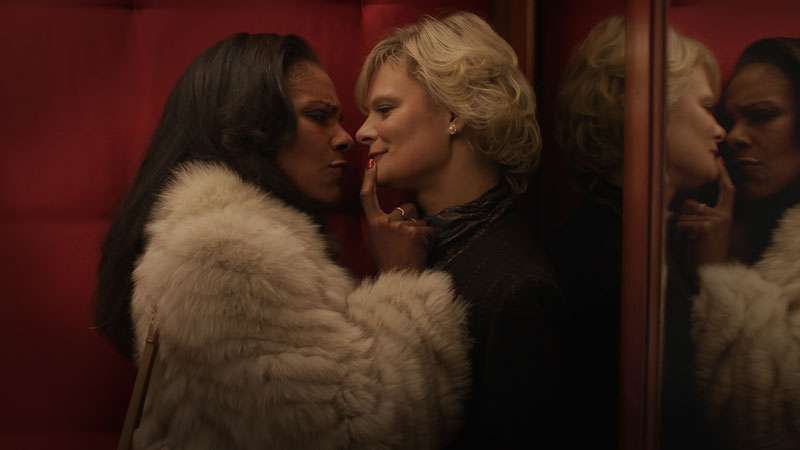 What goes around comes around in the sexual roundelay Hello Again, a musical pastiche flipping through the pages of time to episodically recount the couplings and uncouplings of New Yorkers in 10 different decades, beginning from the early 20th century to the present time. An updated version (of sorts) of Arthur Schnitzler’s 1897 drama La Ronde set to music (it’s based on Michael John LaChiusa’s well-received 1994 off-Broadway production), the film wears its ambitions on its sleeve as it daisy chains from lover to lover, intently focused on maintaining the rhythm of its segues from vignette to vignette to the detriment of any profound insight into its linked characters’ mostly unhappy love lives. The circular narrative in Hello Again may remain unbroken, but inside, this ring of human foible is mostly empty space.

By way of example, in a scene set in 1929, a restless housewife (Willis, daughter of Bruce and Demi) has a rendezvous with her callow and much younger beau (Calderon) in a movie theatre for yet another round of illicit sex, berating herself as morally bankrupt for risking her marriage with a kid interested only in getting head when the lights go down. Shift forward to 1956, when Willis plays another discontented spouse, this time married to a successful businessman (Knight) who no longer expresses any sexual interest in her (is he gay?) despite her best efforts, with both of them ending up masturbating in separate rooms. And then on to 1912, where a closeted fortyish gentleman (Knight) in a first-class cabin on a luxury liner attempts to entice a hungry young man from steerage (Blackburn) … well, you get the idea. (And yes, said ship hits an iceberg during the course of the seduction.) You no more begin to appreciate the sexual and emotional dynamics of each situation (love, power, loneliness, lust, pain) before you’re off to the next tryst. Hello Again feels like a series of quickies in which the participants sing past each other in sentences often lifted straight from the Schnitzler text. For a movie in which people engage in a carnal act every quarter-hour or so, it’s seldom what you’d call a pleasurable experience.

Still, die-hard aficionados of the musical genre may find the form (if not the stories) fascinating, and director Gustafson gets points for effort, subtly connecting the episodes through a title song that’s sung in a style befitting the time. (The dreamy disco version in the 1976 episode is especially nice.) The cast comprised of mostly New York stage thespians (McDonald, Jackson, Plimpton) appears a little lost at times, particularly during the film’s fairly tame sexual assignations, which seem (with one exception: the post-Studio 54 coitus between Jackson and Blackburn) perfunctorily performed, as if the actors knew they had to hurry before the next vignette began. Most of them look as if they’re simply going through the motions: a head-bob here, a hip-thrust there.