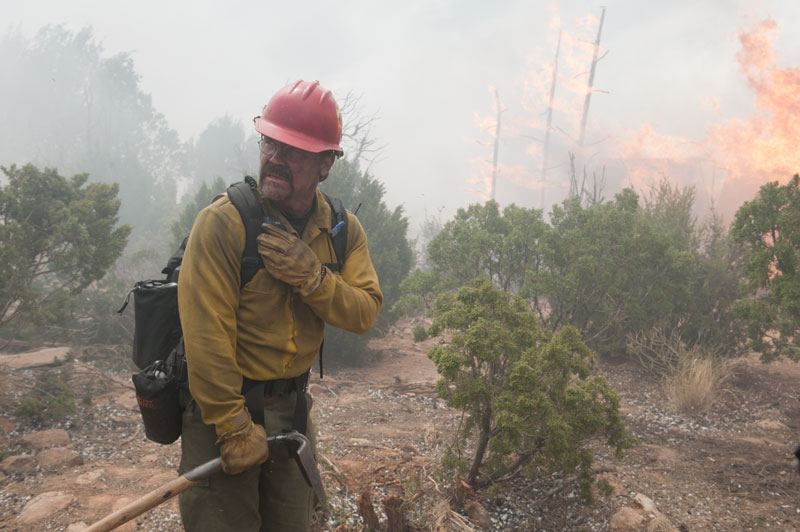 The profession of firefighting is shown for the hard, heroic work that it is in Only the Brave, which is based on the true story of the Granite Mountain Hotshots, 19 of whom died fighting the Yarnell Hill fire in Arizona in 2013, one of the country’s deadliest wildfires on record. It’s a story about rugged but ordinary men who gear up to fight an unquenchable beast, and then go out again and do it all over the next day, as well as the day after that.

Josh Brolin has rarely been better than in this role as the team’s leader, Eric Marsh. Although evenhanded with his men, Eric has a propensity for bucking authority, as well as some issues from his past that are causing tension with his wife Amanda (Connelly, who more than holds her own in this male-dominated story). Eric spots and hires on as a new recruit the former junkie Brendan McDonough (Teller), who has decided to get clean after becoming a father. Scenes of hazing and general group camaraderie are interspersed with scenes of training and actual firefighting. Although a real sense of the details of the job is conveyed, a little more explanation for the laypersons in the audience might have been warranted. Additionally, more explanation might have helped our understanding of the politics and negotiations underway to make the local Prescott, Ariz., wildfire crew eligible to be deemed hotshots. The situation roils Eric, and it involves mayors, taxes, and upper echelons of fire management experts (which is where Jeff Bridges fits into the story, seeming almost a caricature of himself, toting a badge and a guitar).

Joseph Kosinski, the intensely visual director of Tron: Legacy and Oblivion, is great with the disastrous fire sequences and the hellish third act. (With its flying embers and sparks, this is one movie that would probably be unbearable to watch if it were made in 3-D.) However, when it comes to characters, there is very little delineation among the 20 all white men in the unit. The only ones who make an impression, apart from Eric and Brendan, are James Badge Dale’s Jesse Steed, who is Eric’s second in command, and Taylor Kitsch as Christopher Alan MacKenzie, Brendan’s chief tormentor and eventual roommate. The remainder make up a fireman’s calendar worth of twentysomething grit, so it’s nice that photos of the actual firefighters appear onscreen at the end of the film (after the overly sentimental coda). After shying away from moments made for easy tears, the coda seems inappropriate. Only the Brave, for the most part, is as stiff-lipped as the characters it portrays. Oblivion
Tom Cruise stars in this science-fiction outing that favors style over substance.