Sean Baker trades in the iPhone that he used to great acclaim to shoot his last film Tangerine for the vivid range of 35mm in his new film The Florida Project. The shift in technology, however, hasn’t altered his focus on society’s fringe dwellers. From the transgender prostitutes of Tangerine, Baker moves on in The Florida Project to the children and their families eking out lives in the low-rent motels that line the service roads leading to Disney World in Orlando, Fla.

Six-year-old Moonee (Prince), who lives in a room at the Magic Kingdom motel with her mother Halley (Vinaite), is like a Disney princess from an alternate reality. Left to her own wiles by her loving but neglectful and immature mother, Moonee uses the whole of the garishly purple motel and other businesses on the strip as her playground. She leads her playmates in games like spitting on car windshields from upper-story motel balconies and cadging free ice cream cones from the nearby stand. When caught for spitting on the cars, she also gets in trouble for having too much fun while cleaning it up. Depending on your perspective, Moonee is either youth incarnate making the most of her circumstances, or Dennis the Menace determined to drive the oldsters stark-raving mad. Her escapades eventually take a turn from boisterously fun-loving to downright dangerous, which kicks the movie’s low simmer into full boil.

In addition to showcasing the unbridled exuberance of undisciplined youth, The Florida Project also presents another perspective: that of motel manager Bobby (Dafoe, the only professional actor amid this core of non-pros). Bobby keeps an eye on the kids’ antics as he does with the motel’s upkeep. He’s a caretaker for both the kids and the property, but is in neither case an owner or vested party. Although the kids run roughshod over the property, cutting off the electricity and messing with the tenants, Bobby still has a soft spot for them, as can be seen when he runs off a suspicious man who’s watching the kids play. He also does what he can to help out Halley, despite her belligerence and parental inadequacy. He, too, is stuck in this Magic Kingdom, where dreams never seem to come true. Cinematographer Alexis Zabe (Carlos Reygadas’ Post Tenebras Lux and Silent Light) brilliantly contrasts the area’s lurid man-made colors and decor with Florida’s natural physical beauty. At times, The Florida Project may seem to have more episodes than a narrative through line, but that seems also true to the occupants of the Magic Kingdom, who believe they’re simply in a transitional state while they’re actually stuck in idle. 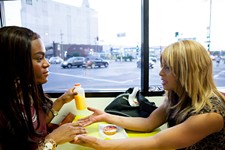