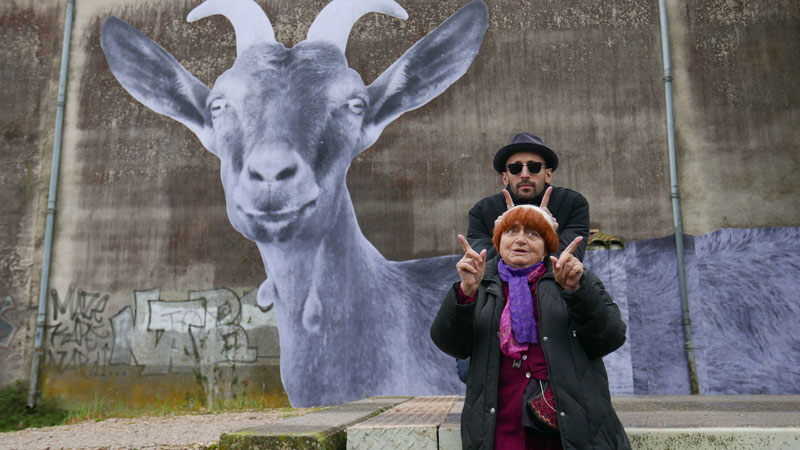 Color me beguiled. This documentary by the unlikely French duo of filmmaking lion Agnès Varda and outdoor installation artist JR is full of discovery, reflection, invention, and transmogrification. The film is a simple endeavor yet a monumental undertaking, a casual riff on some of the faces and places encountered by the artists and a thoughtful meditation on the past and the future of people and their French homeland. The film is personal, playful, soulful, and kind. The only problem with Faces Places is that it ultimately ends, and subsequently breaks the spell.

Varda, the so-called “godmother of the French New Wave,” who inspired so many others with films like Cleo From 5 to 7 and her early travel documentaries from the Fifties, has returned to the documentary form in recent years with much-praised films like The Beaches of Agnès, The Gleaners & I, and several works devoted to the career of her husband, filmmaker Jacques Demy. At the age of 89, she has paired with the 33-year-old visual artist JR, who makes gigantic installations from photographic renderings, to travel around France in JR’s specially outfitted van that houses a printer capable of making enormous images. After stopping in various villages and other destinations, Varda and JR find suitable subjects, hear their stories, take their pictures, and then glue the images of these people on walls, barns, and anything else that’s large and workable. We observe the process, which is never the same, and also listen in to conversations between Varda and JR about art, life, death, and the power of images, as well as hear them sing aloud in the van, visit with JR’s grandmother, and witness Varda’s attempted reunion with Jean-Luc Godard. JR reminds Varda of Godard in that he never removes his dark sunglasses, a quirk Varda finds endlessly irritating. Along the way, we meet many ordinary French citizens: factory workers and farmers, mailmen and bartenders, men, women, and children – all with stories and images to share.

Faces Places is hardly as aimless as it sounds in description; judicious editing maintains the documentary’s thread. Varda and JR share their thoughts with their audience just as they expect their subjects to do for their cameras. Their collaboration creates something neither could have accomplished on their own. The film is an intensely personal record, yet also a universal contemplation. Faces Places leaves the viewer with a sense of the glories of images and communication – sometimes random, sometimes specific, always continual and cumulative.