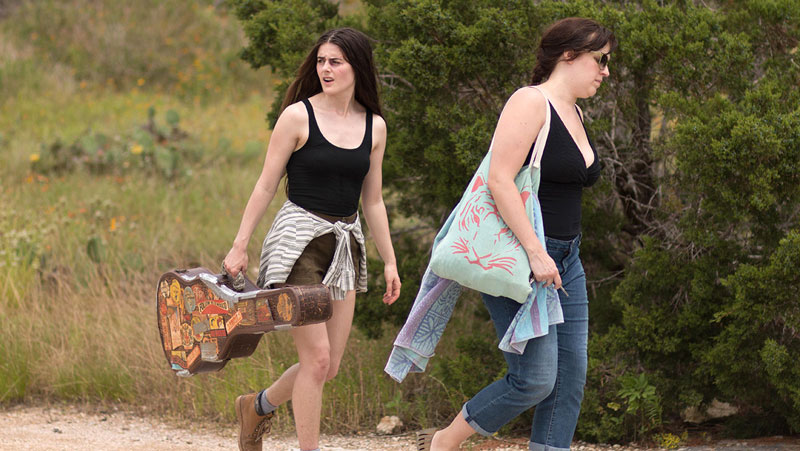 British newcomer Sophie Reid acts with her chin in the simmering dramatic thriller Barracuda, an aggressive posture that aptly conveys the fearless but slightly unhinged Sinaloa, a socially awkward young woman who might have an axe (or some other sharp object) to grind when she unexpectedly shows up one evening at the doorstep of the Austin home of her half-sister, Merle (Tolman, a dead ringer for actress Melanie Lynskey). Reid’s off-kilter character is super creepy at times – she casually nicks the ear of a blowhard cousin with a pocketknife he just used to filet a catfish, nonchalantly covers her head with dry-cleaning plastic wrap in a momentary act of staged self-asphyxiation – but rarely one-dimensional, eschewing the temptation of Single White Female lunacy for something sympathetic to Sinaloa’s feelings of abandonment and envy. Fathered by a philandering (and long dead) Central Texas country musician she barely knew as a child, and raised by a single mother in Brighton, England, this comely drifter blessed with a beautiful singing voice may aspire to nothing more than simply connecting with the paternal musical legacy long denied her. Then again, she may have something more sinister in mind as she attempts to ingratiate herself with the members of her second family, a suspicion blatantly harbored by the clan’s less-than-welcoming, lipstick-and-nails matriarch played by a sorely missed JoBeth Williams. This narrative tension, not-so-subtly conveyed at one point by the prolonged imagery of an array of knives hanging on a kitchen wall, sustains your interest in Barracuda, even when the screenplay goes off the rails a bit in the shaky third act when things get a little grisly.

Filmed entirely in Austin and the surrounding area, the film purposely builds with dread as Sinaloa gets weirder and Merle gets wiser, though the saner sibling’s inexplicable employment crisis and abrupt broken engagement to a suddenly unsupportive fiancé (Bordonada) are puzzling plot developments that distract from an otherwise solid storyline. For local viewers, the movie offers a travelogue of familiar sights: the Downtown Hyatt on Lady Bird Lake, the sidewalk outside the Capitol building, roadside wildflowers in the Hill Country, and the rocky terrain of Pedernales Falls, among other things. It also capitalizes on the milieu’s music-lover reputation by featuring several lovely yet intense performances by Reid, as well as appearances by Butch Hancock and Colin Gilmore. In the end, Barracuda may not have the sharp teeth of the Hollywood nail-biters that have swum before in familiar waters. But if you’re attuned to its slow-burn charm, it still offers some bite. 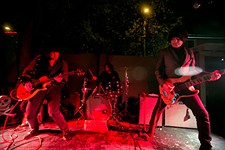 Now, Forager
This film about love and fungi will be followed by a locally foraged meal. For more on the Fusebox film lineup see "Experimental/Experiential," April 27.