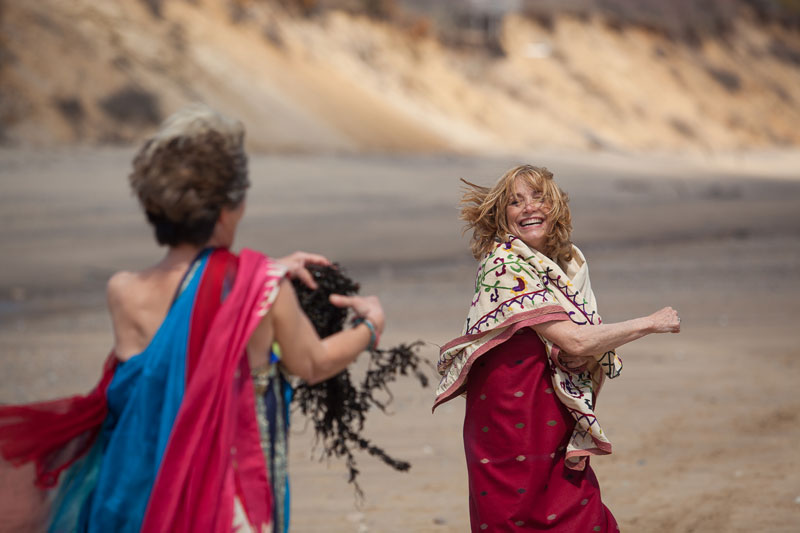 Year by the Sea

Women who haven’t already eaten, prayed, and loved themselves into transformative experiences in self-reclamation, might instead try the movie Year by the Sea. Based on the bestselling memoir by Joan Anderson, the film details the author’s initial experiences in self-help. An empty-nester, Joan (Allen, once upon a time the ingenue in films such as Raiders of the Lost Ark and The Wanderers) is faced with relocation to Kansas from her home in suburban New York when her husband Robin (Cristofer) gets an unwanted job transfer. Instead, she decides to follow her own path and rents a cabin on Cape Cod with the goal of fending for herself for the first time in her adult life. For decades, she has been a good wife and mother, and now she wants to explore other facets of her being. She is also a writer, as her book agent (Merkerson) frequently reminds her, although, curiously, we never see her write.

Filmmaker Alexander Janko, a musician and film composer making his writing and directing debut, shows no special feel for the material (although the Cape Cod settings are picturesque). Karen Allen imbues Joan’s story with some whimsical moments, but she is not a subtle enough actress to convey the character’s inner thoughts. Subtlety is not among the movie’s goals, however. Witness Joan’s struggle to teach herself for the first time how to row a boat, which is necessary for her to use to access her cabin. Any joy in her success is drowned as her wedding ring disappears into the water in the course of her effort. No sooner than making land, she meets another Joan - Joan Erickson (Imrie), wife and professional partner of the famed psychologist Erik Erickson (who, incidentally, is responsible for coining the term, “identity crisis”). This other Joan is a free spirit, who hands the newcomer a sari-like wrap and invites her to join in dancing in the dunes. They become best friends. Another friend is the shopkeeper Luce (Curnen), a woman who endures the abuse of her frequently drunk boyfriend – until, of course, she, too, becomes touched by the magic wand of self-help. There’s also the handsome fisherman Cahoon (Bisson), who gives Joan a job in his shop, as well as taking her out to commune with the harbor seals, and later teaches her how to clam for extra income.

Janko is unable to refrain from inserting meaningful singer/songwritery tunes after almost every sequence and montage, although oddly, he uses the Herman’s Hermits’ saccharine pop hit “I’m Into Something Good” as the accompaniment for the scene of Joan and her fisherman clamming and, later, romping on the beach. Year by the Sea is full of well-meaning but misguided moments. Before seeing it, you should gauge your tolerance for activities such as women learning to literally weave the threads of their lives in their looms. Rock my boat, Year by the Sea did not – but, then again, I make no claims for self-actualization.