Like Cannibal Holocaust and Woody Allen’s Interiors, Lemon falls under the category of great first-date litmus-test films. If you’re both on the same cinematic wavelength, you’ll either love or loathe this highly stylized exercise in cringe-inducing awkwardness. At times, it recalls some of graphic artist and writer Daniel Clowes' ultra-neurotic oddball characters, while other moments in the film had me thinking of the non sequitur and absurdist work of Quentin Dupieux (Rubber, Wrong Cops). Whatever you choose to make of it, Bravo and co-writer/spouse Gelman have crafted something so intentionally and self-reflexively off-putting that I’m still banging my head against the wall trying to figure out if it’s comic gold or just lives up to its title.

Gelman plays the bearded and balding Isaac Lachmann, a socially awkward, fortysomething drama teacher whose every utterance seems calculated to either irritate or confuse. What remains of his own acting career is going less than nowhere in Los Angeles (at various points he’s reduced to “acting” in a PSA about the dangers of hepatitis C and an ad for adult diapers), his blind girlfriend Ramona (Greer, whose frizzed-out hair deserves a credit of its own) is stepping out on him, and his only friend, acting student Alex (an also bizarrely coiffed Cera) is picking up gigs and being insufferably pretentious. Also on hand is Jacobs' Tracy, another actor, who’s shown rehearsing Chekhov’s The Seagull to death with Alex, as Isaac rails against her performance. Isaac’s outré depress-a-thon looks to brighten when he falls for Cleo (Long), which also give Lemon some of its more sublime moments as it delves into the realm of clueless, white guy racism. Isaac is by no means your normal white guy – is there such a thing? – but Long’s presence lightens the tone a tad from morose, indulgent, and contrived misery to something more realistic. Not that Bravo and Gelman are attempting anything remotely naturalistic in both character and execution. A surreal Jewish dinner sequence has everyone from the great David Paymer to Rhea Perlman singing endless choruses of songwriter Dean Friedman’s “A Million Matzoh Balls.” Oy, vey.

Although guaranteed to split critics and viewers alike, nobody can argue that Bravo and Gelman haven’t put their all into this absurdist, existential farce. The question remains: Will Lemon make or break that all-important first date comedy connection? (Personally, I’m sticking with Ruggero Deodato.) 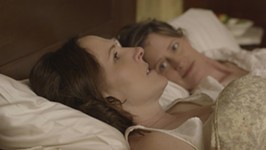 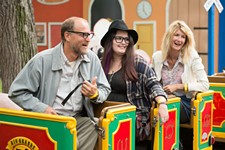 Wilson
A lonely curmudgeon finds out he has a daughter