Even though 19-year-old Frankie (Dickinson) is out of school, he has no job and is still living at home with his parents and sister in their house on the outer edges of working-class Brooklyn. He spends his afternoons and evenings hanging with his pals at the local vape parlor or taking the train to Coney Island where they smoke weed, eye girls, pick pockets, and otherwise cavort. Back home, Frankie spends more furtive time in the basement tentatively checking out gay chat rooms on the computer, while upstairs his father lies in bed dying of cancer. Frankie’s knucklehead friends would never condone Frankie’s homosexual curiosity were they to know about it; even Frankie is uncertain since he also reluctantly accepts as a girlfriend Simone (Weinstein), who plucks him out from the crowd at the Friday-night fireworks.

The psychology of Frankie’s situation isn’t probed any more deeply than what’s described above, which can be a bit frustrating. However, Beach Rats isn’t about the story as much as it’s about texture and tone. When not outdoors shooting in the summer sun, the film often resorts to the cover of darkness, which is masterfully photographed by Hélène Louvart. The dark recesses are an apt match for Frankie’s laconic interactions: Much is hidden. Frankie and the other boys are frequently shirtless, the camera relishing their buff, young bodies and staring at the male physique with the openness of Claire Denis’ Beau Travail. British newcomer Harris Dickinson, with his puffy lips and physical magnetism, invites us to maintain our gaze.

Writer/director Eliza Hittman, who won the director’s prize for this film earlier this year at Sundance, has a special feeling for teenagers’ emergent sexuality. Her previous film, It Felt Like Love looked at a young girl’s fumbled attempt to mimic her older friend’s sexual and moral promiscuity. In Beach Rats, Hittman looks at a boy’s attempt to demonstrate to himself and others that he’s not gay. Hittman’s style is to explore these inchoate longings through visual cues that evoke a strong sense of mood and place. The details of characters’ internal thought processes are left to our imagination. Still, this movie hits the senses like the fresh impact of saltwater air. 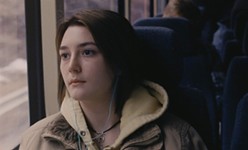