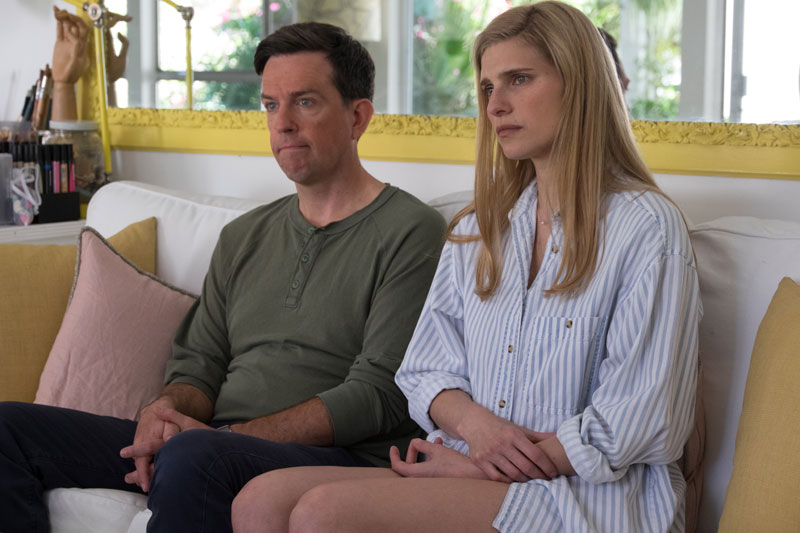 Marriage is dead, so sayeth avant documentary filmmaker Vivian (Wells) in her quest to turn marriage into a seven-year contract with an option to renew. This is the thesis of her new film, after the questionable success of Tween Jungle. And this is the entry into I Do … Until I Don’t, a middle-of-the-road domestic comedy from writer/director/star Lake Bell (In a World …; girl loves her ellipses). We are introduced to three couples, in various states of crises. There’s Alice (Bell) and Noah (Helms), trying to conceive a child that neither one of them is sure they want but feel biologically compelled to do so anyway; there’s Alice’s sister Fanny (Heard), a free-spirit hippie, who, with her boyfriend Zander (Cenac) practice a (not so) open relationship; and finally, there’s Harvey (Reiser) and Cybil (Steenburgen) a middle-age couple ensconced in the petty bickering that eats away the soul. All three have agreed to be a part of Vivian’s doc, and we follow along as she attempts to manipulate them to forward her argument, and how they ultimately resist, come to understand one another, and live happily ever after.

All I can say is: What the hell is going on here? Bell is a smart and hilarious creative talent, but the characters in I Do … Until I Don’t are the most trite and stereotypical personas that have been so played out in this genre of film. There’s Reiser’s mid-life crisis motorcycle dude, Bell’s shy, submissive wife who takes a walk on the wild side, Helms’ nebbish yet earnest husband, etc. If the characters all didn’t land on safe ground by the film’s end, I would have thought the whole film was a parody of those tropes. But it’s not. Despite some clever writing (Widespread Panic jokes never go out of style), a game cast, and a funny critique of the ethics of documentary filmmaking, I Do … Until I Don’t never rises above the trite characters and well-worn scenarios it depicts. Best to get the annulment papers ready.