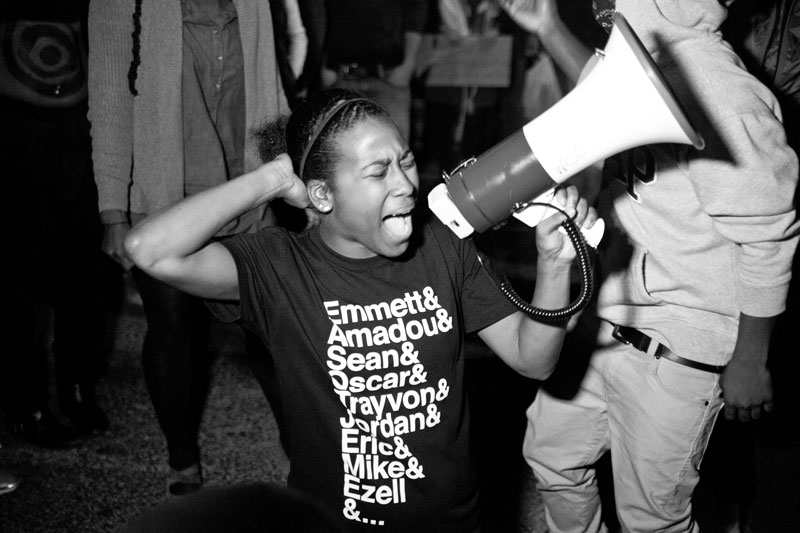 Bristling with unapologetic righteousness, the ragged documentary Whose Streets? takes no prisoners in its raw depiction of events transpiring in the predominantly African-American community of Ferguson, Mo., about three years ago. On an August day in 2014, a white police officer shot an unarmed 18-year-old black man, Michael Brown, several times on Canfield Drive. The teenager’s lifeless body lay in the middle of the street for approximately four hours after his death, covered by a white sheet. Witnesses asserted that the young man’s hands were raised in the air at the time he was killed. The civil unrest that followed eventually transformed the St. Louis suburb into a war zone in which both peaceful protesters and angry looters were met by an overkill paramilitary response of armored vehicles, tear gas canisters, and rubber bullets on a scale rarely, if ever, seen before on American soil.

The film is divided into five chronological chapters, each introduced with a quotation by an iconic African-American. In the film’s initial section, which begins with a passage from Martin Luther King Jr. – “A riot is the language of the unheard” – co-directors Folayan and Davis adeptly rely upon the cinema verité of cell phone videos to tell the story of the 10 days in Ferguson that shook the world. Regardless of the facts surrounding young Brown’s seemingly senseless death, what you see in this chaotic first-person footage is something impossible to get your head around if you’ve lived your life in a cocoon, as most of us have. “This is not fucking Iraq!” a woman shouts incredulously at the top of her lungs on a neighborhood street under siege during one of the many police vs. citizenry confrontations captured on video. How could it all possibly have come to this?

Make no mistake: Whose Streets? is not interested in providing an evenhanded presentation of viewpoints about what happened and why in the summer of 2014 and thereafter, including the Black community’s unsurprisingly combustible reaction in November 2014 to the grand jury’s decision not to indict the police officer who shot Brown. This is not a talking-heads kind of documentary. The voices heard here belong to people of color living in Ferguson, a community of individuals whose civil rights were persistently violated by the local criminal justice system, according to the Department of Justice. One of the clearest and most compelling of those voices belongs to a twentysomething nursing student and mother of a grade-schooler, Brittany, a passionate young woman who refuses to sit still for any of it. The filmmakers are on a mission here: Accept the polemics of Whose Streets? on their face, and absorb the truths that comprise its volatile narrative of racial injustice. At its core, this movie is a piece of unflinching activism that forces you to look at something uncomfortable, something those of us in the cocoon would probably rather not see. But see it, you should. See it, you must.