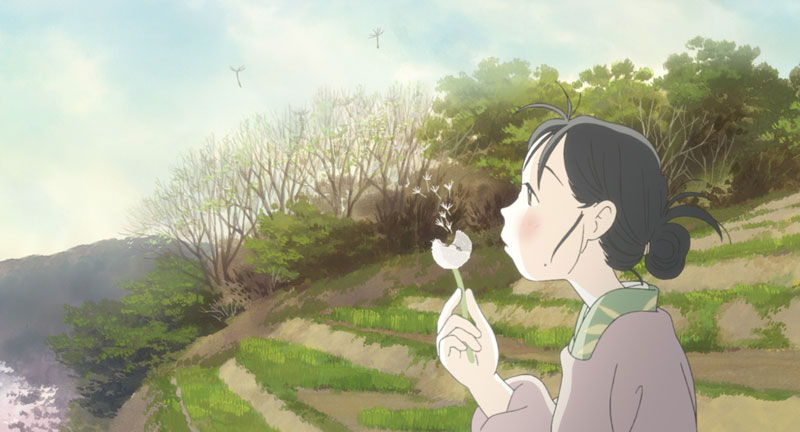 In This Corner of the World

Life during wartime may include privations, anxiety, and in this deceptively beautiful and gracefully animated film, a bright white flash from the direction of Hiroshima. But director Katabuchi (Mai Mai Miracle) leavens this multi-award-winning portrait of teenage protagonist Suzu (Non) with oodles of heart and soulfulness and an attention to the quotidian duties of the Japanese home front rarely seen in the West. Thus, it’s as much a hyper-accurate albeit fictional depiction of everyday Japanese existence during – and after – World War II.

An artistic, sensitive girl given to gorgeously animated flights of fantasy and poetic interior monologues, Suzu lives in the village of Kure, in Hiroshima prefecture, with her parents and younger sister Sumi (Han). Although the film – adapted from the manga by Fumiyo Kono – has a story that runs all the way from 1933 to August of 1945, Katabuchi, who co-scripted with Chie Uratani (notably both are Studio Ghibli alumni), focuses almost solely on Suzu’s perspective, thereby allowing the viewer to experience small-town, wartime life through the eyes of a tremendously sympathetic civilian-cum-dreamer. By the time the Japanese descend on Pearl Harbor, she’s already married to Navy man Shusaku (Hosoya) – a boy, really, who’s as much a sharp-dressed military mystery to her as Suzu the dreamy artist is to him. This middle portion of In This Corner of the World, with its keenly realized depictions of the banal daily drudgery of rural Japanese life during ever-darkening days, is downright Ozu-esque but certainly never less than fascinating. Worse, of course, is looming just up ahead, as American B-29s commence daily drops of propaganda leaflets, incendiary ordnance, and uncountable bombs on Kure and surrounding areas.

That makes Katabuchi’s film sound as grim as can be, but it’s nowhere near as bleak as Isao Takahata’s Grave of the Fireflies. And while In This Corner of the World is bracingly honest in depicting the hardships and tragedies Japanese civilians endured during World War II, it steadfastly remains Suzu’s story all the way through to its – dare I say it? – hopeful conclusion.

In This Corner of the World, Sunao Katabuchi