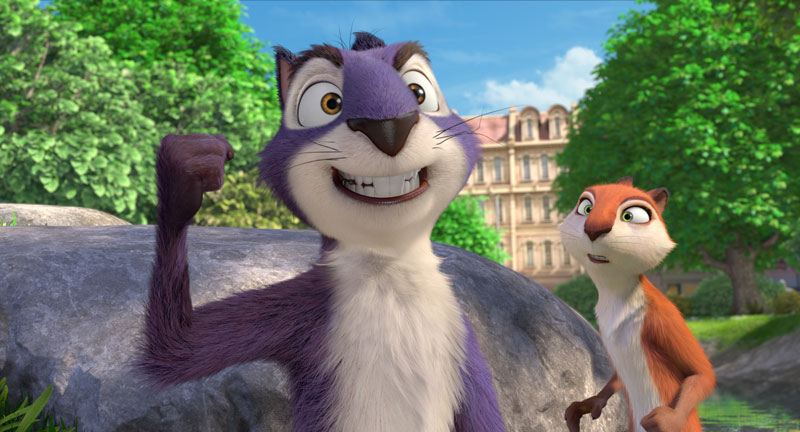 The Nut Job 2: Nutty by Nature

You could, if you chose, scan this sequel to 2014’s The Nut Job as a genuinely subversive attack on capitalism that also doubles as much-less-animated-than-Al Gore polemic vis-à-vis humanity’s omnivorous anti-environmental impulses toward the natural world. But why bother when there’s a purple squirrel named Surly (Arnett), his gal pal Andie (Heigl), and a horde of Shaolin mice led by the ferocious – don’t call him “cute,” whatever you do – Mr. Feng (Chan) teaming up to fight off the greedy mayor (Moynihan) who’s planning to turn their beautiful park into a shoddy, for-profit amusement park? The lesson here is cooperation, not competition, and while this Korean/American/Canadian co-production is just right for the peanut gallery, moms and dads should get a (slight) kick out of it as well.

Longtime animated rodent fans will notice a striking similarity between top squirrel Surly and his goofy rat friend Buddy and Warner Bros.’ classic Pinky and the Brain, but this tale of various woodland and city-dwelling critters banding together to fend off a common enemy is far better suited to its intended preadolescent audiences that P&B’s highbrow riffing on The Third Man, aka The Third Mouse. Instead, The Nut Job 2 is colorful, kid-friendly, and occasionally laugh-out-loud funny. ’Nuff said.