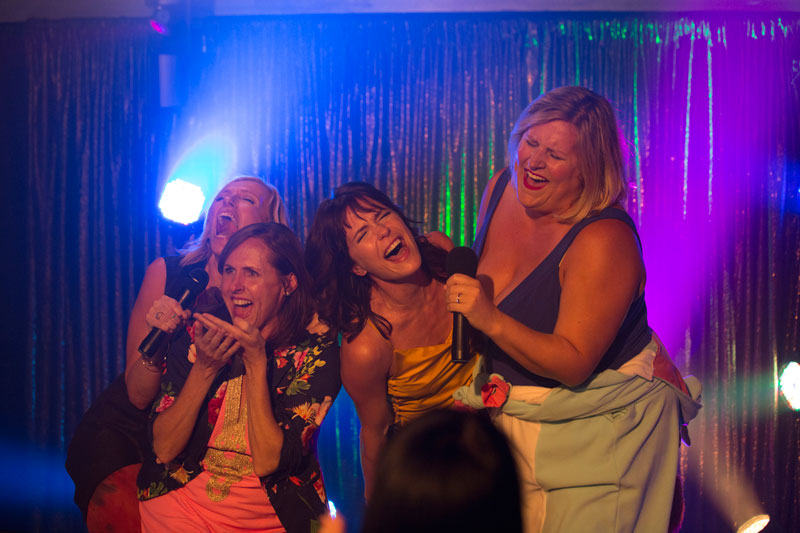 It seems that ever since the success of The Hangover back in 2009, movies have been on a kick to prove that women can behave just as badly as men. Films like Bridesmaids, Bachelorette, and Trainwreck made it safer for women to publicly showcase their bawdiness, drunkenness, vulgarity, and, dare we say, honesty onscreen. This summer the floodgates, for some reason, have burst open, presenting us with a deluge of “women behaving badly” movies such as Snatched, Rough Night, and Girls Trip. Equality can be a strange beast.

Fun Mom Dinner is the latest contestant out of the chute in the transgressive women-on-film sweepstakes. It’s actually a sweet comedy about women bonding and loosening up their maternal identities for one night, although the fact that its jokes aren’t as rude and risqué as some of the previously mentioned films may hurt its potential at the box office (along with its needlessly knotty title). However, director Alethea Jones and screenwriter Julie Rudd, both first-timers, manage to create little moments in which the movie really clicks. The film’s real bonus is the game cast, anchored by veterans Toni Collette (who hasn’t a false bone in her body) and Molly Shannon, and given able assists by director/actress Katie Aselton and live-wire Bridget Everett (also appearing later this summer in Patti Cake$). These four are a strong combo, even when the material underserves their talents.

The moms all meet through their children’s preschool. Jamie (Shannon) is recently divorced and has jumped into the world of Instagram and dating; Melanie (Everett, a revelation) is an overzealous volunteer drop-off guard at the school; Kate (Collette) is a mother of four, who’s had her fill of PTA meetings and the usual mom activities; and Emily (Aselton) is Kate’s old college friend who’s just moved to town and wants to fit in and, perhaps, perk up her sex life with hubby Tom (Scott, an executive producer on the film and husband of producer Naomi Scott). Jamie and Melanie partake in a standing fun mom’s night out every couple of weeks, and invite newcomer Emily to join them. Emily, in turn, tricks Kate into coming along, and what begins as an icy exchange is warmed up by the joint Kate has stowed in her purse. When the group flees the restaurant after setting off the fire alarms while smoking in the ladies’ room, a night of adventure is launched. Their escapades are crosscut with those of their hapless husbands (Scott and Huebel) back home minding the kids and musing on life. For eye candy, Adam Levine is off-handedly tossed into the plot as a Lothario bartender, who serves to test Emily’s commitment to monogamy. Karaoke ensues, as does a trip to a marijuana dispensary overseen by Paul Rudd (husband of the screenwriter). The laughs and pacing of Fun Mom Dinner may be uneven, but days later I’m still smiling at the thought of the dispensary’s recommended strain: the Ruth Bader Ganja, which “gets you supremely high.” It’s the little moments that matter here.