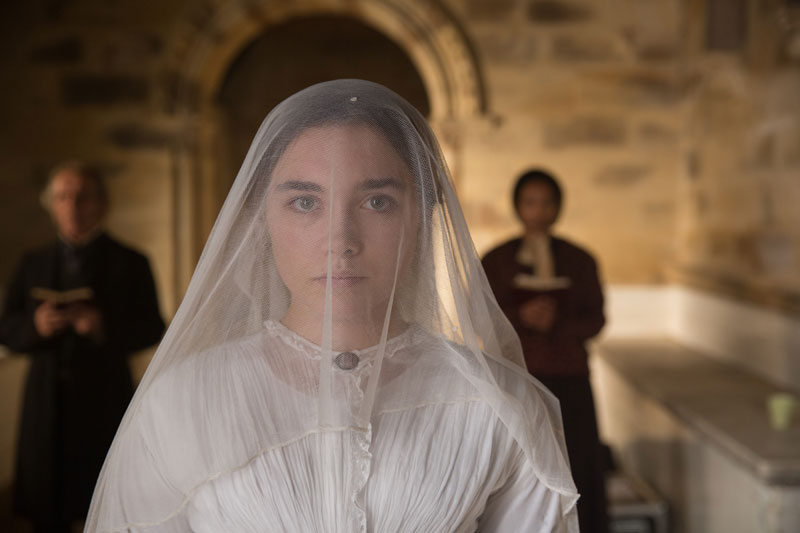 The young bride in Lady Macbeth is a 19th century woman intent on making her own destiny, even if it means murdering anyone or anything that stands in her way. Trapped in an unconsummated marriage-by-contract to a seemingly impotent English countryman twice her age, a humiliated Katherine (Pugh) soon unapologetically enters into a torrid relationship with a swarthy and muscular young farmhand, openly conducting the affair on her husband’s rural estate during his absence in a manner that dares others to stop her. The character’s near-sociopathic drive to defy the misogynistic social norms that imprisoned women of her position and time is ripe with possibility, so why does Lady Macbeth ultimately feel like a gimmick, and an unsatisfying one at that? With no backstory to inform the psychology of its homicidal central character, the movie dictates that you sympathize with Katherine after witnessing the humiliations she endures at the hand of both her husband and the father-in-law who purchased her, and yet recoil with a perverse sense of admiration at the lengths to which she will go to counter such dehumanizing cruelty. By the time an innocent is sacrificed in the film’s third act, Katherine is drained of any sympathy or motive, and the movie ventures into the melodramatic territory it so carefully avoids up to that point. Unlike Shakespeare’s ambitious Scottish noblewoman with blood on her hands, this Lady Macbeth – the film is actually based on an 1865 Russian stage play – loses her conscience (assuming she ever had one, really) as the narrative trudges forward and the body count increases. The consequences of Katherine’s actions may be tragic in the literal sense, but never in a dramatic one.

Newcomer Florence Pugh burns a hole in the screen as the film’s heroine/antiheroine, but even her remarkable intensity can’t defy this muddle. Oldroyd’s formalistic direction is dominated by a penchant to frame his actors precisely, particularly the frequent dead-center positioning of Katherine, directly gazing at the camera like a sphinx. (A similar shot of the household cat suggests the filmmaker may have a sense of humor about himself, or maybe the take was simply a force of habit.) While these directorial choices may evoke the repressive environment from which Katherine seeks to free herself, it paradoxically represses that freedom and eventually suffocates the movie as form overwhelms the puzzling substance of Alice Birch’s screenplay. There’s an intriguing story to be told here, but there’s a better way to tell it. To borrow from the Bard, the spots in Lady Macbeth simply won’t wash away.