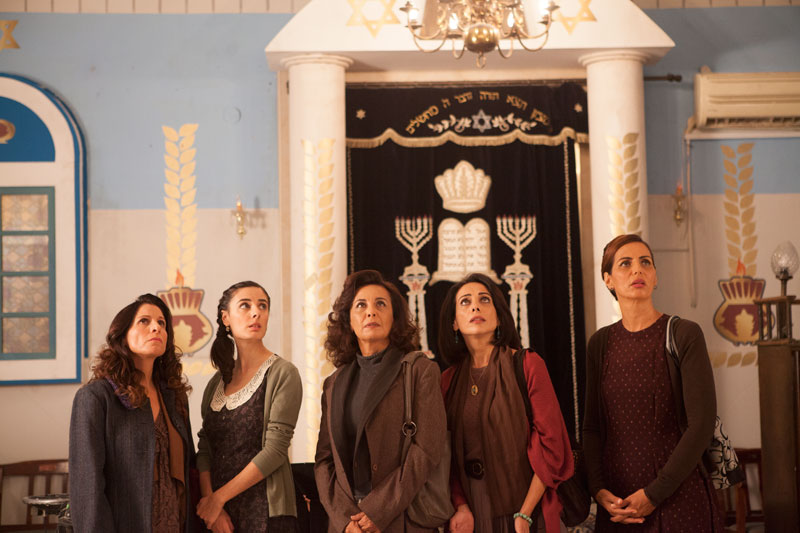 A rift between the sexes is the engine that drives this Israeli comedy. Additionally, The Women’s Balcony sounds an alarm about the insidious creep of extremism and its divisive and ruinous effects on society. It’s an urgent issue in Israel, where fundamentalist and secular ideologies battle for national dominance, but it’s a struggle also manifested in a variety of ways throughout the world today.

In a synagogue in Jerusalem, where Orthodox tradition mandates that women be separated in a balcony apart from male worshipers, a bar mitzvah ceremony is about to begin. But before the boy can start his Torah reading, the women’s balcony collapses, damaging the entire structure. The rabbi, the congregation’s leader, goes into a state of shock after his wife is rendered comatose, and he is no longer of use to his congregation. Gradually, the men accept the young, fundamentalist Rabbi David (Alush) as their acting leader and, bit by bit, he induces them to bend to his will. Rabbi David helps them rebuild the synagogue, but without a proper women’s balcony. When the women intervene and raise money to amend the structure, Rabbi David funnels the money into the purchase of a new Torah, instead. The women fight back by staging protests outside his yeshiva and putting pressure on their husbands at home. Ultimately, this movie that began with a bar mitzvah concludes with a happy wedding celebration.

Populated with a talented cast of popular Israeli performers – including a comedian (Banai) and singer (Sarouf), along with established dramatic actors – The Women’s Balcony moves fleetly and eschews didacticism. The screenplay by first-timer Shlomit Nechama gives all the characters their due without creating villains or resorting to polemics. The spiritual community remains important to all the constituents and the restoration of harmony among all is the goal. Even though some of the religious and traditional aspects of the film may not travel well, its spirit is universal.