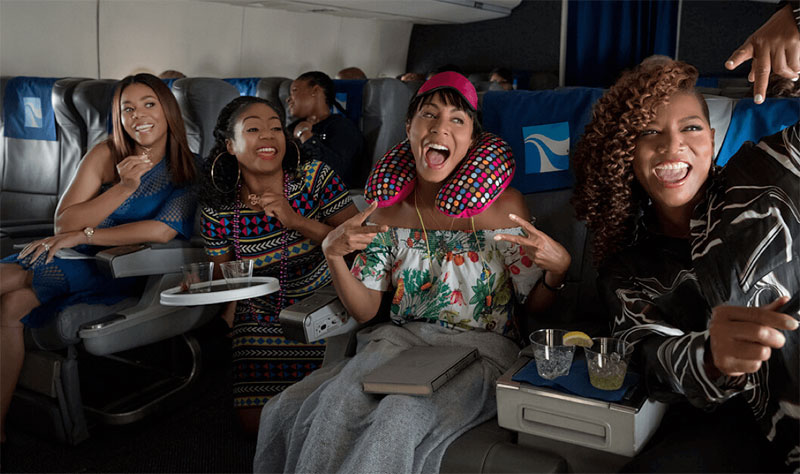 I hate to piss on anyone’s parade, but there are exactly zero male strippers featured in Girls Trip, despite what the promo poster may lead you to believe. In fact, the only onscreen peen is from a dirty old drunk. That’s not to say there isn’t any eye candy to be had, if that’s your thing. There are lots of laughs, too, and while there isn’t a whole lot distinguishing the film from all the other movies featuring women behaving, well, quite frankly, however the fuck they want to behave, it does try and elevate itself a little by asking the age-old question: What does it mean to have it all?

Ryan Pierce (Scary Movie’s Hall) has written a book on the subject (it’s literally called You Can Have It All), and people say she’s the second coming of Oprah. She’s got a booming career, tons of fans, and an ex-football-player hottie husband (Colter, The Good Wife, Luke Cage). But something’s not quite right. Capitalizing on a business trip, she assembles her former girl crew, which goes by the pet name Flossy Posse (yeah, it’s just as cringeworthy as naming your partner’s you-know-what) and off to New Orleans they go, where Ryan is set to give a keynote speech at Essence Fest.

The Flossy Posse dates back about 20 years, to the overglorified oblivion of college. Queen Latifah plays Sasha, a savvy-sleazy celebrity blogger; Jada Pinkett Smith’s Lisa is a granola-crunchy single mom wary of leaving her kids for a few days even with her own mother; and then there’s wild woman Dina (Haddish), who gets fired for assaulting a co-worker with a pint of yogurt in the first few minutes of the film. Flat supporting characters these are not.

While NOLA is a welcome change from the worn-out glitz of Las Vegas, many scenes are sequestered in upscale hotels and clubs, where the film features brief performances by throwback acts such as New Edition, Mariah Carey, and Ma$e & P. Diddy. (And on that note, Cîroc vodka made several appearances. Coincidence?) Conflict arises as the plastic sheen of Ryan’s “all” starts to melt away, leaving her real life exposed. And the message here is clear: You can’t front to your true friends. This clique is ready to take on the world, and they aren’t afraid to fight dirty for each other. What can I say? Squad goals.