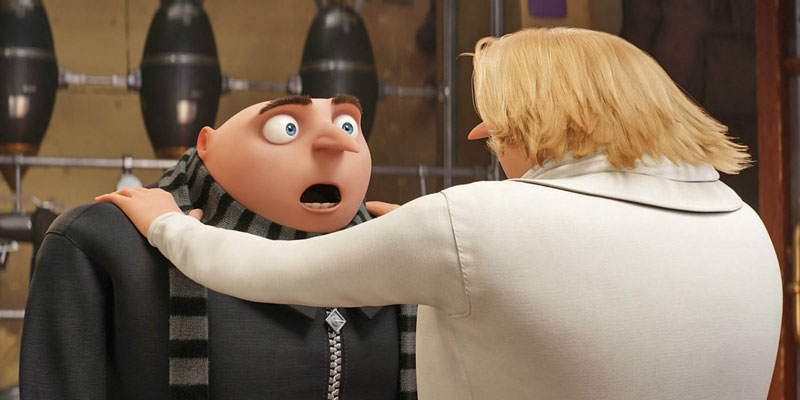 Enough with the Minions, already. The further misadventures of former supervillain-turned-nice guy and anti-villian agent Gru (Carell) take a turn for the predictable when he discovers he was separated at birth from his twin brother Dru (also Carell). Alas and alack, Dru appears to be everything Gru isn’t: fabulously wealthy with his own island, a mansion that even Donald Trump might fancy, and – the unkindest cut of all – a full head of luxurious blond hair. Oh, the ignominy of the bald ex-baddie. Dru and wife Lucy (Wiig), along with their three admittedly adorable kiddies, visit Dru’s supercool villa, but trouble keeps raising it’s mulleted head in the form of former pre-teen TV star and now dance-happy global maniac Evil Bratt (Parker), who’s out to steal a 4,000 carat diamond and level the Los Angelean cityscape that turned its back on him when he hit puberty. (Hey, it happens.) There’s also a few random subplots tossed in for good measure, chief among them a visit to the Eastern European principality of Freedonia. Marx Brothers fans take note: Nothing here rivals that sublime surreality of Duck Soup.

The third time is definitely not the charm when it comes to Universal’s animated franchise. Where the first film took a nifty idea and ran with it and the sequel upped that ante by way of love and redemption, Despicable Me 3 is a yawn-fest crammed full of gags that simply don’t work. Even the target audience – little kids – appeared unimpressed, with nary an outburst of laughter to be heard. The animation is superb, particularly when it focuses on Gru/Dru’s James Bond-ian gizmos and other assorted marketing accessories coming to a toy store near you anytime now, but the script by Ken Daurio and Cinco Paul is both too much (unicorns!) and far too little. A middling offering at best, it’s time to retire Agent Gru and let him get on with domesticity. Who knows what skeletons might turn up in his garden plot?