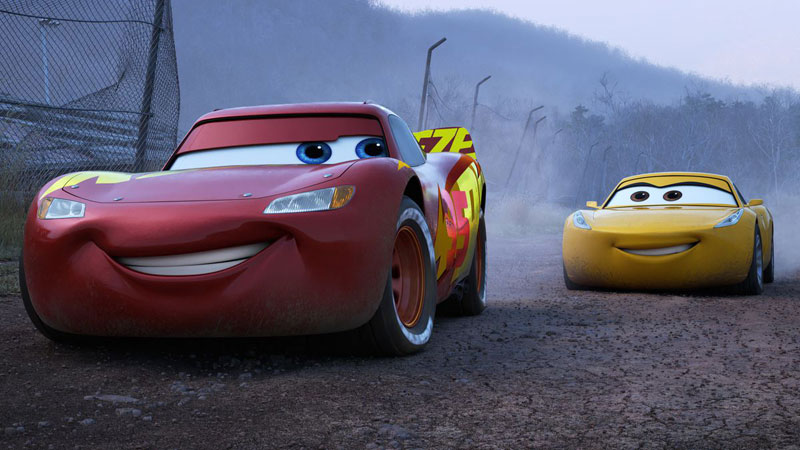 Pixar’s anthropomorphic automobile franchise may be the least-loved of all of the groundbreaking animation studios’ movies so far, but the kiddie set continues to love it no matter how low the storylines’ MPE (miles per entertainment) drops. Having said that, you can nearly always count on even the least of Pixar’s projects to be better and more thoughtful than any of their rivals, and that remains the case here. Adults will instantly notice that Cars 3 begs, borrows, and steals bits and pieces from everything from Moneyball to virtually the entire Rocky Balboa series to tell this iteration’s tale of aging hero race car Lightning McQueen (Wilson) coming to grips with the fact that he’s not the badass speed racer he used to be. This is an interesting/odd take on the Cars universe, seeing as how this is a movie squarely aimed at pre-teens who likely have no concept of aging, let alone four-wheeled mortality, or for that matter Joseph Campbell’s monomythic “Hero’s Journey.”

Retreading aside, Pixar’s animation gleams and rivets the eyes for nearly every moment of this comeback-kid semi-comedy. By now, that’s a given. Their attention to background animation, be it, gravel, mud, or chunks of steel-belted radial tire debris coming at you in 3-D – employed to great, subtle effect here – fires on all cylinders, and the voice acting is bang-on (including that of the late Paul Newman and Tom Magliozzi of NPR’s Car Talk, who is also no longer laughing his contagious guffaws along this mortal wavelength).

The story, from a sextet of Disney/Pixar scribes, has a much less firm grip on the track. Subplotted between the main issue of Lightning getting his mojo back (or not) is a strangely unfulfilling pseudo-romance between that little engine that could and his new trainer, a lemon-yellow Porsche that goes by the name of Cruz Ramirez (Alonzo). There’s a thready theme of female empowerment here that feels tacked on, although bumper-to-bumper, it’s really Lightning’s story almost all the way to the checkered flag. While I can’t recommend Cars 3 to any parents I know, their offspring will have a ball viewing all the eye candy up on the big screen. As Lightning McQueen comes to realize, obsolescence is a bitch, but that doesn’t mean you’re headed to the junkyard anytime soon.