Not counting 2004’s execrable Van Helsing, this umpteenth iteration of the 1932 Boris Karloff shocker is Universal’s initial foray into rebooting their classic movie monsters, now dubbed “Dark Universe.” It’s big, it’s slick, it’s very, very Hollywood, but it’s just not that good a film. It’s not even as much fun – and monster movies, as opposed to horror movies, should be fun – as the 1999 Brendan Fraser vehicle of the same name.

Screenwriters David Koepp, Christopher McQuarrie, and Dylan Kussman bear the brunt of the blame here, chiefly because so many of the set-pieces and sequences have been lifted part and parcel from other, better films. I noted direct lifts from An American Werewolf in London, The Abyss, and, yep, lots of do-overs from that pre-millennial, similarly titled Stephen Sommers flick, among others. Yikes. That’s a lot of cribbing, guys.

After a lengthy bit of introductory explanation set in ancient Egypt, the film fast-forwards to modern-day Iraq, and American soldiers-cum-looters of antiquity Nick Morton (Cruise, playing against type) and Chris Vail (Johnson). Pinned down by enemy fire in the midst of nowhere, they radio in a hellfire missile strike that ends up blasting the lid off of a gigantic underground tomb. This in turn interests archaeologist Jenny Halsey (Wallis), who has the sarcophagus within shipped to London for study by her boss, Dr. Henry Jekyll (Crowe, seemingly channeling John Goodman). Jekyll’s the most interesting character here, seeing as he has to inject himself every hour or so with the serum that keeps his alter-id, the Cockney scalawag Mr. Hyde, in check.

The Mummy’s kinda/sorta ace in the hole is the titular creature itself: he’s a she. Algerian-born actor Sofia Boutella plays it straight and makes for a fine figure in rotting bandages, literally sucking the life out of every man she meets. The tepid plot has her seeking a ruby-encrusted, all-powerful dagger that can summon Set, the Egyptian god of the dead, but that’s not really the focus of the film. Actually, the entire film lacks focus, despite the unsurprising arc of Cruise’s character, who transforms from selfish jerk to “a good man” by the time the final credits roll.

But is it worth shelling out $12 to watch this bombastic piece of “classic” cinema mediocrity? That all depends on how many rubies you have in your wallet. As for me, I’ll be rewatching the crypt-cold classic Karloff version this evening to wash the digital sand out of my memory. 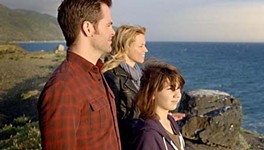 People Like Us
More Ordinary People Like Us than anything terribly original, this drama starring Chris Pine, Elizabeth Banks, and Michelle Pfeiffer still scores some good points along the way.