Sometimes a dog is a woman’s best friend. That’s the case with the titular misfit Marine (Mara of The Martian) and Rex, the stubborn but fierce IED-sniffing German shepherd she ends up handling after being booted down to the K-9 unit at USMC Camp Pendleton after a drunken night out with fellow marines. Grieving for her recently deceased best friend, enduring shrill belittlings from her mother (Falco), missing her estranged father (Patton), trapped in a feloniously generic small town, and generally wallowing in existential depression, you can’t fault tomboy Leavey for hopping the next bus to excitement and warfare – how bad can it be?

After a standard training montage that made me pine for Warren Oates’ Sgt. Hulka in the 1981 Bill Murray vehicle Stripes, Leavey ships out to “The Shit” – aka 2003 Iraq – with Rex in tow where she’s assigned to walk ahead of soldiers’ Humvees searching for land mines, snipers, and just plain old wartime SNAFUs. It’s no spoiler to say she wins the respect of the troops she’s guiding, along with the sandpapery admiration of K-9 Master Sgt. Gunny (Common), or that both her and Rex are eventually wounded in battle. But Megan Leavey, the-movie-based-on-real-life-events, is a strange combination of The Hurt Locker and Lassie. What’s that, Rex? You say little Hadji has fallen down the well and needs his cell phone bomb trigger?! Good boy!

I’ve always believed that movies depicting warfare should at least attempt to match or best the “war is hell” nightmare scenario of actual combat, but the PG-13 Megan Leavey sidesteps the horrors and ends up being about the lengths to which one person can go to bring about moral justice. Here, that translates to PTSD-suffering Leavey’s indefatigable, postwar agitating to adopt her furry, now equally unbalanced, wonder dog by appearing on national news with her story and eventually reaching out to Sen. Chuck Schumer (Masset).

Director Cowperthwaite previously helmed the award-winning Blackfish, yet these two films couldn’t be more different in tone and execution. There’s something missing here, and it’s the glossed-over bonding between dog and handler. There’s hardly ever an overt moment where the audience clicks with the unique, near feral solidarity between Rex and Leavey. Smartly shot and edited, with a passable score from Mark Isham, Megan Leavey still falls short of bristling battlefield-and-beyond greatness. This is a film that can’t decide if it wants to be a war movie or a rescue dog melodrama and therefore falls into cinematic no-man’s/woman’s-land. 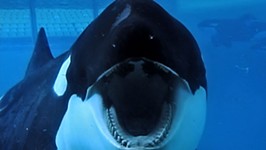 Blackfish
Orcas exploited in the name of entertainment and free enterprise is bad business in the view of this doc.