Anything featuring The Rock these days – err, Dwayne Johnson – seems to be met with a complicit agreement that, while this might not be the best film you’ve ever experienced, the movie theatre’s A/C kept you cool for two hours, and maybe, just maybe, you had some chuckles. Those laughs are unfortunately too spread out to recommend this latest Nineties TV reboot wholeheartedly, but if you sit back and let the film wash over you, you might find some mild relief from its overly eager attempts to make you laugh, or perhaps feel something other than impending dread of the end of the world.

Well, that got dark pretty fast, so let’s back up and talk about Mitch Buchannon (Johnson), ex-Navy Seal and dedicated lifeguard, who watches over the beaches with his trusted crew. Enter Matt Brody (Efron, a delight), a former Olympic swimmer who disgraced himself à la Ryan Lochte, a party bro with an attitude who is Mitch’s foil for the film. Add Alexandra Daddario as Summer Quinn, Kelly Rohrbach as C.J. Parker, and Jon Bass as schlubby newcomer Ronnie, who – no surprises here – ends up in a wish-fulfillment fantasy tailor-made for anyone looking to find some sort of solace with the film.

There’s a plot somewhere, involving nightclub owner Victoria (Chopra, vamping it to 11), who is dealing a drug called “flakka” and has designs on privatizing the beach, and a pretty funny running joke involving the local police repeatedly admonishing the zealous lifeguards to stick to performing CPR, and stop, you know, going undercover to take down a drug kingpin. But mostly the overly long proceedings consist of dick jokes and a constant reminder that this is an ironic take on bygone property. There are cameos, a few engaging callbacks, and sand grifters, but for the most part, Baywatch resembles a scarce amount of its origin and relies on a none-too-arch humor that misses more than it hits. And any reboot of the show that doesn’t include Mitch’s son Hobie is a wash in my book. Talk about missed opportunities.

My Year With Baywatch
To protect and surf 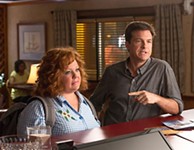 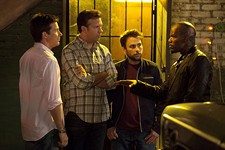 Horrible Bosses
While this comedy aims for new nadirs in raunchiness, the rest of its humor coasts on obvious gags and recycled jokes.