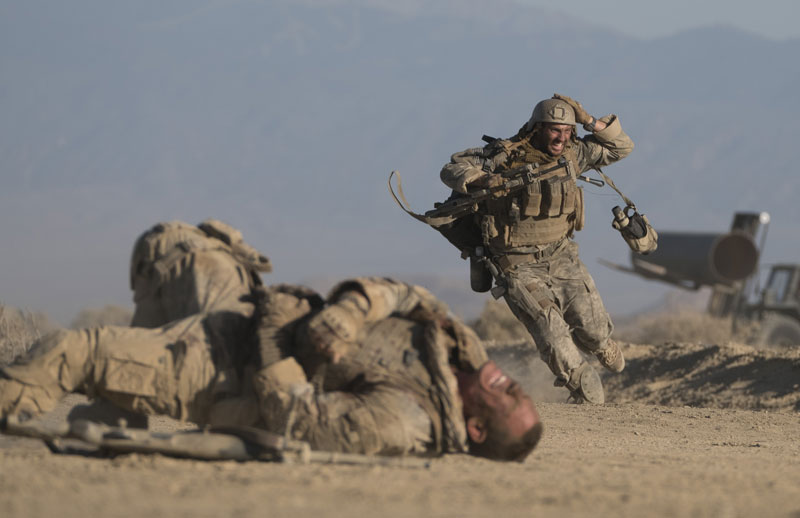 Former Black List scribe Dwain Worrell gets his feature debut shot at the screenwriters’ brass ring in this tale of two U.S. soldiers pinned down by a cunning Iraqi sniper. At a trim 81 minutes and featuring just three characters – one of whom is never seen – director Liman (The Bourne Identity, Edge of Tomorrow) scales his vision way back into indie-film territory. (Thanks, Amazon Studios!) Incidentally, The Wall might’ve worked even better as an off-Broadway play; Worrell’s spare dialogue flows and ebbs like gunshot blood and hard truth. There’s no doubt this dour and desiccated war movie kicks and spits both literal muzzleflash and also that of the psychic variety, but there’s not enough emotional recoil here to render this a claustrophobic classic.

The admittedly genre-cliched setup couldn’t be simpler or more dramatic: Two U.S. Army soldiers are sent into the Iraqi hinterland to figure out what happened to a group of pipeline contractors. Turns out everybody’s dead, head shots all. As The Wall opens, Sgt. Isaac (Taylor-Johnson) and his partner Staff Sgt. Matthews (Cena) have been hunkered down, surveilling the killing site for a grueling 18 hours. As the spotter, Isaac, aka “Eyes,” keeps watch but sees nothing suspicious – he’s ready to pack up and go. But Matthews is determined to inspect the bloodbath from a closer perspective. Then, the air-splitting hiss breaks the silence, as a sniper’s round hits Matthews. He falls and then, seconds later, the echoing report.

Sgt. Isaac rushes down to assist only to be shot in the knee himself. It’s then that he crawls over the titular wall, the only decent cover around. This is where The Wall really begins, matching the utter desolation of Isaac’s halfass desert redoubt and Matthews’ total exposure a mere 10 feet away, with an increasingly intriguing radio dialogue between soldier and sniper. It’s the sort of cat-and-mouse game that recalls certain elements of such disparate films as John Boorman’s Hell in the Pacific, Larry Cohen’s screenplay for Phone Booth, and, one key line in Dan O’Bannon’s Return of the Living Dead, believe it or not.

American Sniper this is most definitely not. Heaving under 120-plus pounds of body armor, weaponry, spare magazines, and the hundred other necessary items U.S. soldiers were outfitted with during the Iraq War, Cena and Taylor-Johnson look exhausted from the get-go, and increasingly worse after that. Director of Photography Roman Vasyanov (Suicide Squad) brings the viewer close in: sandstorms, blood on the sand, a rickety, un-mortared wall, and the near-biblical remoteness of the Iraqi desert all conspire – along with their quizzical, chatty killer – to kill and kill again.

Edge of Tomorrow
The sci-fi is a bit fuzzy – and the alien beasties are anything but – in this Tom Cruise action onslaught.