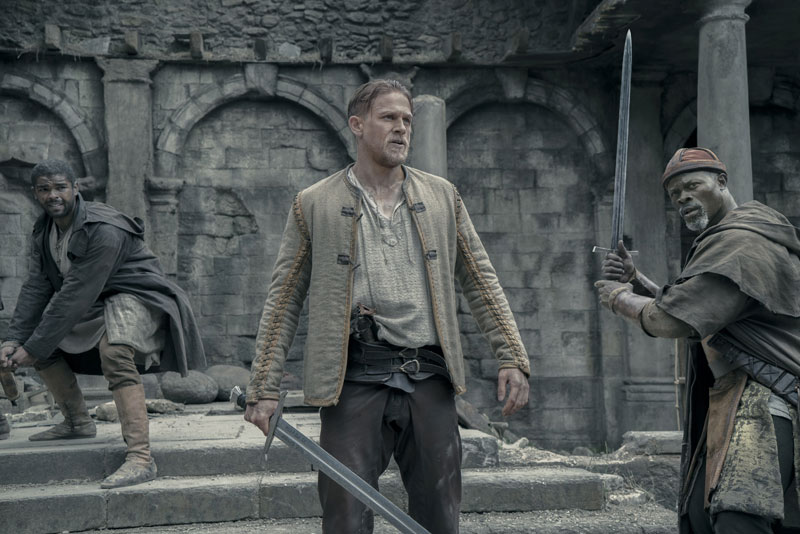 King Arthur: Legend of the Sword

Guy Ritchie’s superfluous King Arthur reboot stars Charlie Hunnam as the man who would be king, brought up to 21st century code with a lotta side crunches and wisecracking pals he calls his crew. Raised an orphan with no memory of his royal lineage, his Arthur fairly quickly pulls the sword Excalibur from the stone, but it takes a lot longer for him to agree to challenge the evil king Vortigern, who’s played by Jude Law in delicious eyeliner, layered extra-thick for whenever he’s playing extra-evil.

The action is generic and frequently incoherent. When Arthur puts two hands on Excalibur, Richie goes for a video game “power-up” aesthetic – swiveling camera, fetishistic slo-mos and hard stops. Legend of the Sword is wall-to-wall CGI, oppressively so, every frame crammed with ones and zeroes that don’t add up to much of anything. By contrast, Annie Symons’ costume design is tantalizingly tactile – chain mailed Vortigern’s eagle epaulet, and Arthur’s fetching leather hybrid of sherpa jacket and Western duster.

The future of Ritchie’s series – this is the first in a proposed six installments – likely hangs on Legend of the Sword’s box office success. Still, this opening salvo’s premature sequelitis saps its here-and-now entertainment value. Why kick the can with the love interest? Does Ritchie think he’s being cute with that under-construction Round Table? Hodgepodging bits from the Arthurian canon – a dash of Mordred here, a quick shake of the Lady of the Lake there, and don’t forget the shout-out to OG Merlin – Ritchie and his co-writers forge a faux-historical storyline with amusing (if never truly witty) punch lines and heavy supernatural elements, but utterly fail at conveying … well, the magic of this oft-told tale. Nothing here excites the imagination, conveys the rich romance of the legend, or even sticks in the brain after you’ve unstuck your feet from the movie theatre floor. The story never drags – it’s too frenetically paced for that – but it’s still kind of a drag.